If political parties want, they can pay a monthly salary to their presidential candidates and also charge the expense to the Tribunal Supremo de Elecciones (TSE) – elections tribubal – as organizational expense and training. 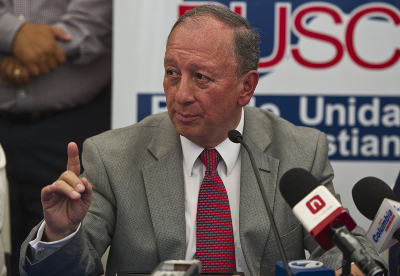 That is the word from TSE’s Hector Fernandez, explaining that if a political party decides, it can set a monthly salary for their candidate, but keeping transparent the origin of the funds used to make the payment.

Today, no presidential candidate receives a salary for representing their party. In fact,  each candidate confronts not only having to finance their own way to the presidential chair, but also face economic losses of salary they gave up to enter the election arena.

The discussion on salaries was tabled by presidential candidate Dr. Rodolfo Hernandez of the Partido Unidad Social Cristiana (PUSC), who told the press that his campaign is being funded by his daughters and wife, who are supporting his presidential bid.

Johnny Araya, presidential candidate for the Partido Liberación Nacional (PLN) recently gave up his salary as San José mayor, when he resigned to officially run for president. Neither José María Villalta, of the Frente Amplio, nor Justo Orozco, of the Costa Rican Renovation,  nor the candidate (not yet named) for the Libertarian Movement receive a salary.

Weighing in his “grano de arena” (Spanish for his two cents worth) is former president Oscar Arias, who on his facebook page calls presidential candidates disuscussing salary as political “newbies”.

“I personally do not agree with this (the payment of salary), because anyone who has this kind of aspiration has to know that this fight will represent economic, personal and family sacrifices and must be willing to take … promoting a paycheck to those who hold political office while on campaign undermines the principle that politics is a service and that public office involves many sacrifices …”, writes Don Oscar.

In the case of Dr. Hernández, he has asked for a leave of absence without pay from director of the Hospital Nacional de Niños (Children’s hospital) to take part in the political campaign. Unlike, Araya and others, Dr. Hernández has a well paid job to return to if he not elected president next February.

QCOSTARICA - Costa Rica's economic activity registered in April 2021 a year-on-year growth of 8.8%, a figure affected by a “base” or “rebound” effect,...
Coronavirus