President Solis’ Popularity Slumps: Only 30% Rate His Work As “Good” 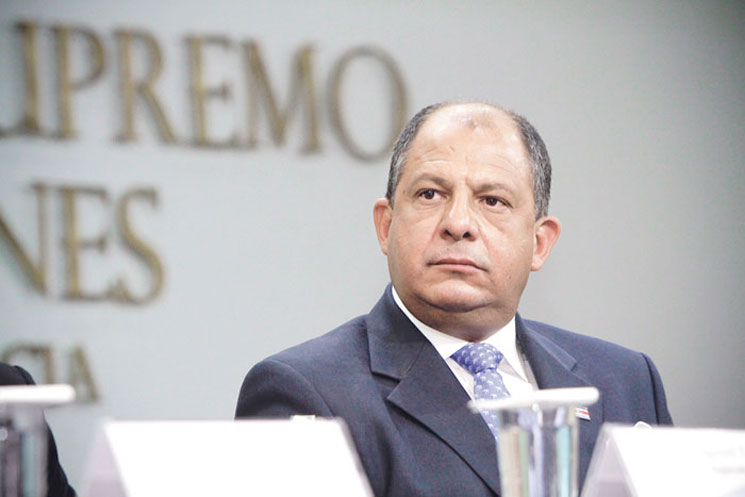 QCOSTARICA – Only one third of Costa Ricans are positive on the work President Luis Guillermo Solís has been doing after eight months in office, says the latest poll by CID Gallup.

The poll reveals that 30% of the respondents described the work of the President as “good or very good”, while 41% believe it is “neither good nor bad” and 27% “bad or very bad”.

This places Solís near the bottom of the list of the last ten presidents, placing seventh overall, according to the survey.

The numbers also show a decline in the President’s popularity.

Solís, of the Partido Accion Cuidadana (PAC) party was voted on April 6, 2014 after a second round vote, winning against all odds, surveys placing him fourth prior to the February 2 voting.  Solís took the presidency on April 6 with 78% of the votes, which translates to 1.3 million votes cast for him, the most ever in any election in the history of the country.

In Costa Rica, the presidential elections are every four years, on the first Sunday of February. The winner not only has to have the majority of votes, but has to obtain over 40% of the popular vote. In 2014, neither of the top two challengers, Solís and Johnny Araya, obtained the required minimum votes on February 2.

Q24N - The president of El Salvador, Nayib Bukele, announced on Monday the possibility of continuing with the removal of officials, two days after...
Electric Vehicles

QCOSTARICA - With more than 1,600 electric cars of various brands circulating in the country and Chevrolet's new proposal for the second half of...
Mexico

QCOSTARICA - After breaking all records last week, the number of new daily cases of Covid-19 in Costa Rica continues on the decline, according...
Nicaragua

TODAY NICARAGUA (Confidencial) Six months before the general elections in Nicaragua, The Economist Intelligence Unit (EIU) predicts that the regime of Daniel Ortega and Rosario...
World

Q REPORTS (The Economist) Technological change is upending finance. Bitcoin has gone from being an obsession of anarchists to a $1trn asset class that...
Latin America

Insightcrime.org - The decision by legislators aligned with El Salvador’s President Nayib Bukele to oust the country’s top prosecutor may spell the end of...
Nicaragua

TODAY NICARAGUA – The Observatorio Ciudadano (Citizen Observatory) report revealed this Friday, May 7, 878 new suspected cases of infection with the virus and...
Trends

Costa Rica is a country filled with beautiful nature, miles of coastline, and even volcanic formations. All these things make it a wonderful place...