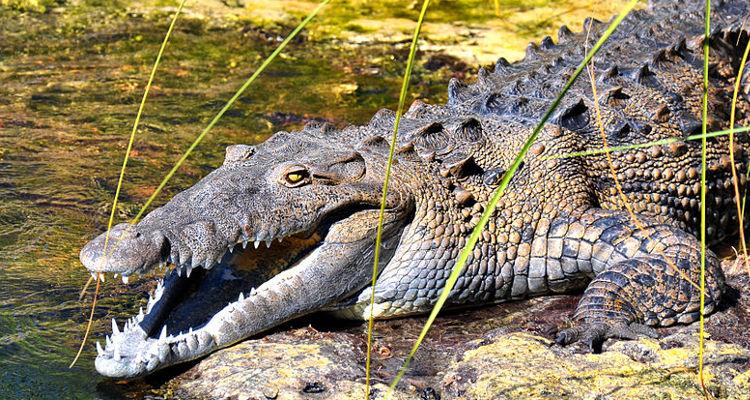 Costa Rica’s iconic spectacled caiman, a cousin of the crocodile, is protected by thousands of acres of prime forest preserved in the Tortuguero Conservation Area. But recent research shows that these conservation efforts alone might not be enough to protect the species from damaging human impacts.

Up in the headlands of the Rio Suerte, upstream from the coastal tropical forests where caimans make their homes, is prime banana plantation territory. Researchers from the University of British Columbia found high levels of pesticides in the blood of the caimans that live downstream, including chemicals that are known to act as endocrine disruptors.

Bananas, ubiquitous in our grocery stores, are one of those few fruits and vegetables the “locally grown” craze has missed. We import them by the millions and expect them to be cheap and identical—a commodity fruit. But growing bananas to meet the global demand requires massive plantations that use lots and lots of pesticides.

The bananas we typically eat, the Cavendish variety, are seedless and produced by cutting techniques. That means that all the plants are very closely related, genetically, which creates an easy target for fungus and insects.

In the tropics, heavy rains frequently wash the pesticides off the crops, leading to increased spraying and high levels of pesticide contamination in the runoff that flows downstream. In the past twenty years, total pesticide use in Central America has doubled, according to figures cited by the researchers.

Previous research had linked pesticide runoff to fish kills, but the UBC scientists wanted to see if the chemicals were accumulating in the region’s top predators, so they set out to catch some caiman. At night. By hand. After identifying them by the red glow of their eyes. Spectacled caiman are relatively small crocodilians, but they are still 4- to 6-foot-long predators that can weigh upwards of 80 pounds.

They caught 14 relatively healthy caiman—six directly downstream from the plantations in an area they had designated as high impact and eight in neighboring areas less directly in the path of pesticides. They took blood samples and body measurements to assess the general physical health of each individual.

When they analyzed the blood, they found legacy and current use pesticides in all the samples. The analysis looked for 70 chemicals of interest, and nine were found, including DDT and other pesticides that are currently banned. They also found legal pyrethroid insecticides. As would be expected, they found more pesticides in the blood of the caimans who lived more directly downstream from the plantations.

The analysis led the authors to concluded that all the caimans were indirectly exposed through their prey, mostly fish, but that some were also directly exposed. They also found that the overall health of the caiman appeared lower in those individuals with higher chemical exposure.

The researchers didn’t find any direct evidence of toxic impacts. Instead, they think the data suggests that pesticides are slowly disrupting the ecosystem, with the chemicals accumulating in the top predators. They point a pretty strong finger at banana farming, writing that “although these plantations are economically important to Costa Rica, the ready detection of a range of legacy and currently used pesticides in caiman in a national wilderness area raised important questions about the moral sustainability of banana agricultural production.”

Designating a wilderness park can do a lot for endangered or threatened species, but this case of the caiman demonstrates that even a protected park is not a self-contained safe haven for wildlife. No ecosystem is closed, out of reach of the environmental damages beyond its borders.

QCOSTARICA - The most important changes in the vehicular...
National