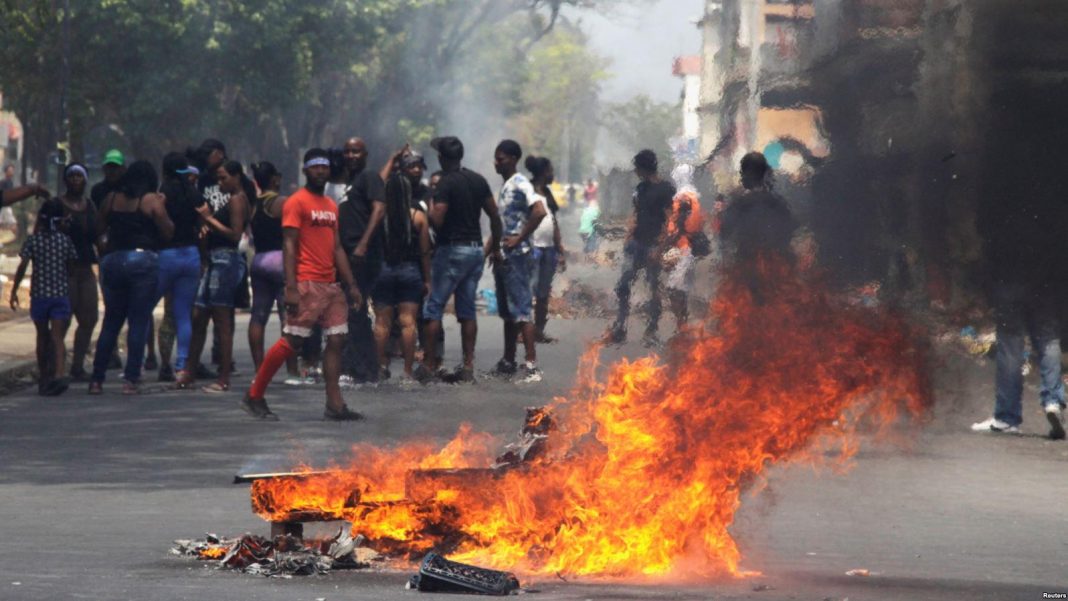 COLON, PANAMA —  A protest over infrastructure and insecurity turned into violent clashes with police Tuesday in Panama’s second biggest city, which is home to a strategic port at the northern end of the Panama Canal.

Preliminary reports from national police said four officers were injured and 18 people were arrested for looting, vandalism and attacks on police. There was no information on civilian injuries.

Demonstrators are angry over what they see as the slow pace of a project to revitalize Colon’s collapsed sewer system, deficient water supply and crumbling housing. Ditches left open for protracted periods have regularly filled with dirty water and flooded streets, giving off a foul stench and making life more unpleasant in an already dilapidated city.

A march called by a social and labor movement ended without incident in the city center. Protest leader Edgardo Voitier called on supporters to return to the streets Wednesday and announced that a general strike in Colon province would continue for another 24 hours.

But splinter groups of protesters broke off and threw rocks at police, set at least one patrol car aflame, burned tires and wooden pallets, and looted some businesses. Riot officers responded with tear gas.

Public transportation was paralyzed and stores were shuttered, though activity was normal at the canal, port facilities and the Colon Free Trade Zone.

“We are not applying makeup. We are rebuilding,” Gonzalez said.

Despite being a key commercial port, Colon has seen decades of neglect from a succession of governments in Panama City, leading to a protracted decline in the quality of infrastructure.

President Juan Carlos Varela, who visited Colon after taking office in 2014 and promised people there a turnaround, has said his government is spending more than $1.2 billion on public and social works in the city.

Residents of Colon “have been abused for many decades, and the current president promised them that he was going to improve their quality of life,” said Marco Gandasegui, a sociologist at the University of Panama. “Nearly four years have gone by and not only has that promise become hollow, it has hurt the great majority [of people] with a project that openly cheated them.”

Protesters also demanded more attention be paid to combating crime in the province, which has one of the highest homicide rates in Panama.

Tuesday’s protests were the most serious in Colon since violent demonstrations in 2012 against an initiative to sell off property in the free trade zone.

QCOSTARICA - An outbreak of 15 people positive for...
Politics