Front PageJournalNews
By Rico
22 May 2015 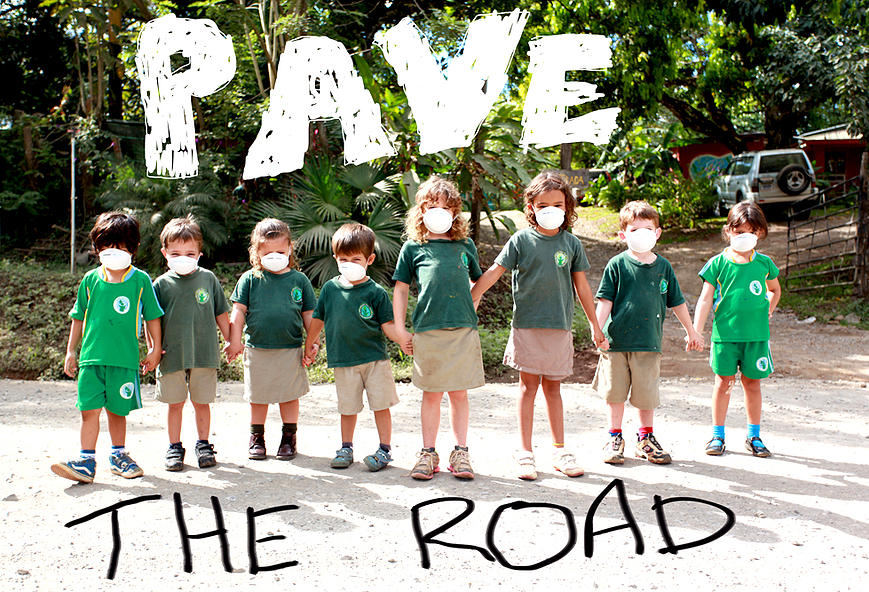 (QCOSTARICA) Thousands of locals and expats are protesting against the unpaved roads in the Southern Nicoya Peninsula of Costa Rica. Their children are being diagnosed with chronic lung infections, skin infections, eye infections, some will go blind as they become adults, and others will die due to road fatalities unless we do something now.  See photo gallery here.

Enter Pave The Road, an organization of concerned parents and community members that have worked for three years to build partnerships with government officials, private companies and foundations to create eco-friendly road solutions. 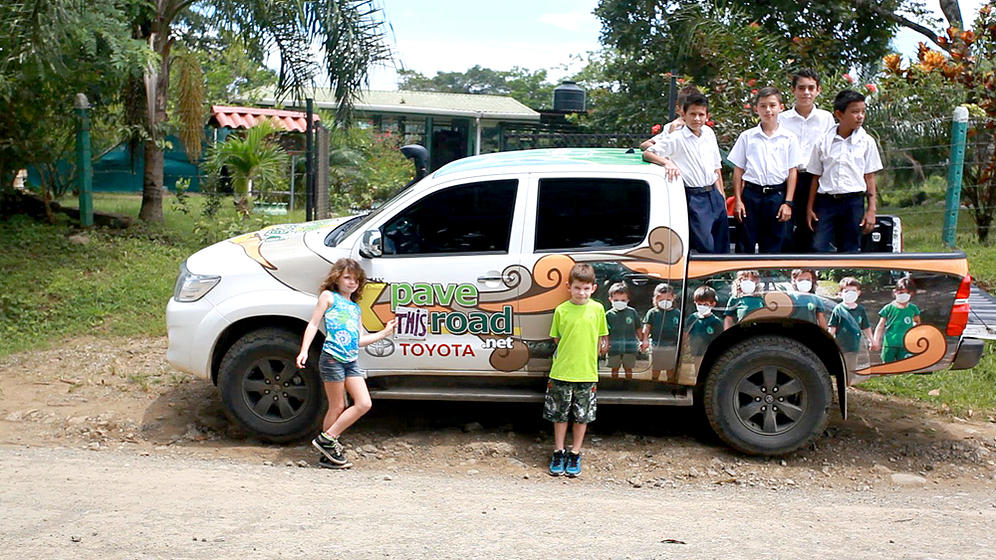 Protecting the children first. Working in partnership with the National Laboratory of Costa Rica for road construction (LANAMME), they are creating field tests in front of each school using recycled materials: plastic waste, rubber waste and construction waste to help reduce landfill pollution and create a clean air environment for the school children to breathe daily.

The unpaved roads were a charming aspect of the countryside to the city dwellers that would escape to the coast, however, over the course of three years, Santa Teresa, Montezuma, Malpais and the surrounding areas have grown at a rapid rate and the roads have become a death zone. 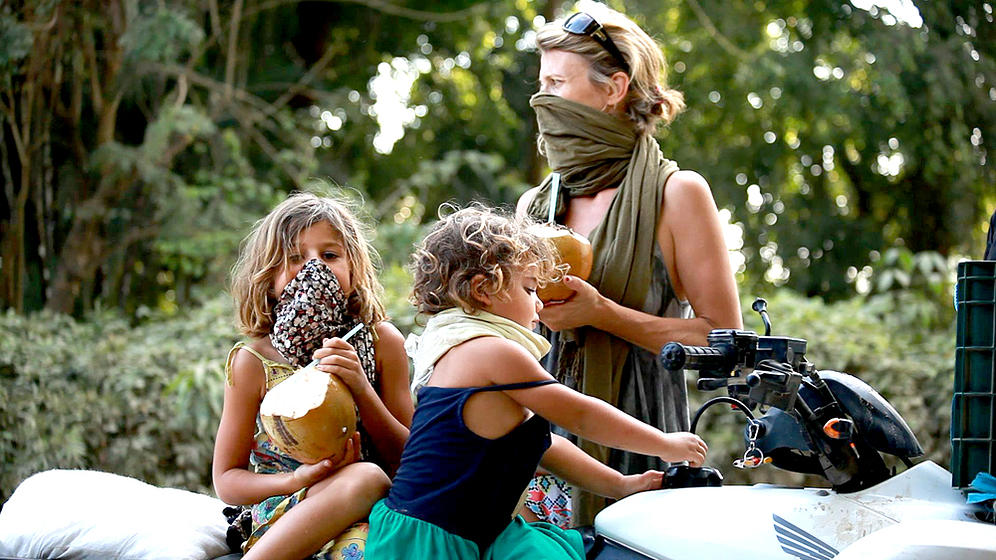 In the dry season, the tiny dust particles called “particulate matter” contributes to irreversable consequences like asthma, blindness and fatalities.

White-outs make is difficult to see vehicles that may only be 4 feet away. The dust enters the open air schools and a thick layer covers the children’s desks, books, hair, clothes, and food daily.

The roads are not only dusty, they are extremely dangerous due to their poor conditions. Pot holes and loose rocks become a fatal obstacle course for some.

The cost to upkeep a vehicle is extremely high due to the punishment the vehicles takes on a daily basis. 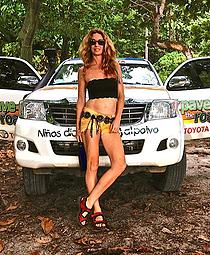 Pave The Road was founded by Kelly Mason who was born in Canada and raised in both Trinidad, W.I and Canada. She came to Costa Rica on a yoga retreat and realized the community was in crisis from the unpaved, dusty roads.

She is the heart of the Pave the Road movement that is being asked for by the masses.

She is committed to creating the change necessary for the people of the Southern Nicoya Peninsula to thrive. [/su_pullquote]There are alternatives to paving the roads: molasses and water but they are temporary and costly options. Water is already a fragile resource and to use drinking water to water roads is an outrage.

The only real solution is to pave the roads. Why not pave them with a technology that is superior to the existing model. Recycled materials aren’t new to the road building industry and recycled plastic waste makes alot of sense.

We are in the process of creating a new formula that provides a solution for the disposal of plastic waste as well as longer lasting, better roads.

Partnering with Toyota Purdy Motor, Pave The Road will be presenting a Public Awareness Social Media Campaign, documenting the journey, with a documentary film with national and international theatrical/VOD release dates in 2016.

In September 2014, Toyota Purdy Motor Group saw the value and importance of this initiative and donated a “HERO HILUX” vehicle to create awareness for the mission.

In November 2014, Kimberly Clark Costa Rica has donated 1,000 masks to aid the children and the community in protecting against the particulate matter. The masks have been distributed throughout the schools and the communities of Santa Teresa, Montezuma and Cobano.

The story is a testimony of commitment and faith.

When I arrived in Costa Rica as a single mother with two young children, aged 3 and 5, I was eager to pave new roads in our lives. I didn’t realize I would become a road builder.

The kids and I became sick from the unpaved road dust in the rural communities of the Southern Nicoya Peninsula. We struggled with how we would stay here (in what is supposedly a blue zone) and thrive in an environment that was forcing us to take one step forward and two steps back. I suffered from asthma when I was a kid and now, nearly 20 years later, I find myself puffing on a ventilator daily so that paradise doesn’t choke me.

After trying to solve the breathing problem by moving houses often, I received a call from a distraught mother telling me how her son had stopped breathing in the middle of the night. She declared the unpaved road in front of the Cobano School a health hazard. The dust had gotten him too. We were not alone. What were once quiet beach towns were now highly touristic areas ranking top 10 for surf and tourism destinations. More traffic equaled more dust. 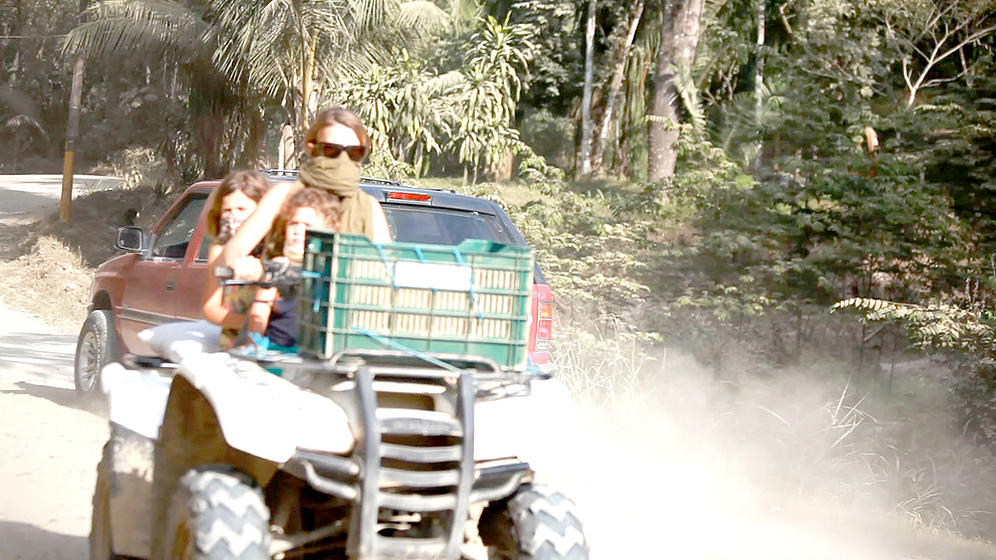 The unpaved roads were taking not only the good health from the children and community members, but also precious drinking water, well running vehicles, and the peace of mind that every human deserves. I knew something needed to be done soon and that the solution needed to be extraordinary to receive support from the government.

Pave the Road is my story of making a small corner of the globe a healthier place by presenting a global solution, which uses plastic, and rubber waste to revolutionize the way roads are built. With the help of Costa Rica’s leading road building engineers and leaders in the road building industry I created an opportunity to bring an eco-intelligent road formula to the forefront by paving in front of seven schools in the Nicoya Peninsula with a leading edge protocol. My strategy is to inspire the government to stand behind this innovative opportunity to make paving in front of all schools mandatory.

My story promises to remind you that anything is possible as long as you believe in your dreams, live in wonderment of your potential, be present to the joyous feeling of well being, and the awareness that you are creating your experience.

Cell phones are a fully integrated part of our...
Travel