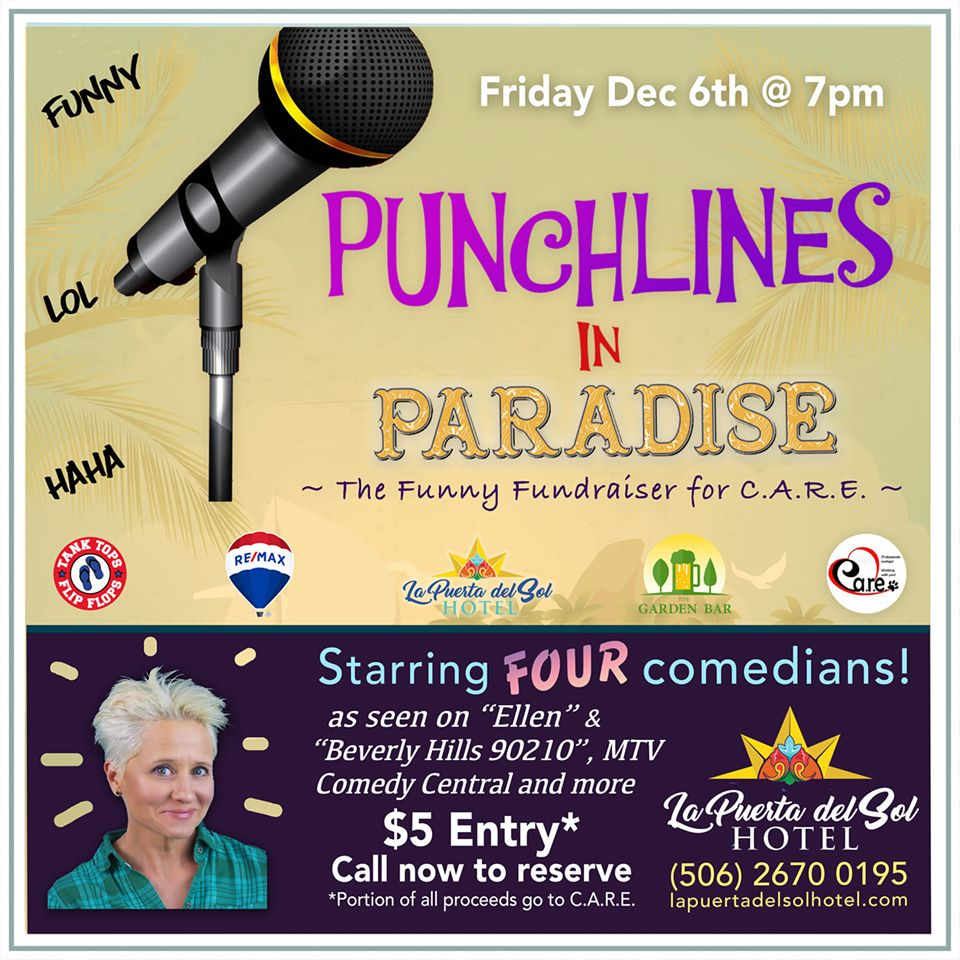 Get ready to laugh your tail off at the Punchlines in Paradise – Fundraiser of Coco C.A.R.E., with hilarious comedians from the United States.

Lang Parker with her impressive comedic timing, instant likability on and off camera and impressive writing skills gained her national attention on the Emmy-nominated NBC show Last Comic Standing. She floored judges when she came out in her overhauls and asked, “Have you ever been mistaken for a lesbian?”

Lang regularly tours clubs and cities all over the United States as well as numerous tours overseas to entertain the US Armed Forces.

Maria Walsh, “America’s Naughtiest Mommy” redefines parenting and offers some original tips in her one-woman tour de force. She may appear like a classic SUV-driving, latte-drinking, suburban soccer mom but Walsh says what most people are thinking but are afraid to say. In the era of child worship, Walsh mocks the art of child-rearing in a hilarious fashion that gets mommies and daddies laughing so hard they can’t hear the babysitter calling on their blackberries!

Charlene Mae, a standup Comedian and actress based in Los Angeles. Charlene’s comedy can fit her comedy to any audience. Her material is versatile and her performance flows with non-stop laughter, all while being edgy without being offensive.

Laura Hayden, Comedian/Doctor/shoe fanatic. Laura recently appeared on Stand Up In Stilettos for TV Guide Network. In addition to numerous other radio, TV and podcasts appearances worldwide in August, she returned to Scotland for the 5th year in a row to participate in the Edinburgh Fringe Festival.

Barbara Holliday, owner of Flappers Comedy Club in Burbank and H2F Comedy Productions an LA Based Comedy Management and Development company, Holliday is an unexpectedly funny, blue-eyed, 5-foot-2-inch dynamo. And since 1999, she has been Managing Comedians and Producing live comedy shows, festivals, and television pilots. A few of her shows include Uncle Clyde’s Comedy Contest, sponsored by the Riviera Comedy Club in Las Vegas, Survival of the Funniest and the Hollywood Ha Ha Festival, as well as many projects for film and television. She has also been on 14 Game Shows- Is that legal?

Eight years ago you could not drive down the main street of Playas del Coco without noticing at least 10 stray, unwanted, sick, and malnourished dogs. Eight years ago you would see another 10 of these dogs on the beach. These poor animals were just the visible portion of a large population of unwanted dogs and cats living in Coco.

Today, you do not see these animals. That is because eight years ago C.A.R.E. was organized by a large number of volunteers and financial supporters. During those eight years, 4,200 dogs and cats have been neutered. Hundreds of animals have been helped back to health with medications donated by C.A.R.E.. The whole town has now come to accept the neutering of pets as a normal, humane thing to do. To this day, 35 to 40 animals are brought to CARE by their owners to be neutered each month.

That is real success! Thanks to all the volunteers and professional veterinarians who worked to make this happen.

It is now time for C.A.R.E. to change tactics. As of November 2016 we are going to turn over the actual neutering to Dra. Jessica, one of the many great veterinarians in Coco. She will be able to schedule the neutering of dogs and cats throughout the week; no longer will the people of Coco have to wait at the big monthly clinics and this way possibly even more than the monthly clinic average can be handled.

CARE will continue to provide fundraising and money to pay for the neutering when people cannot afford to pay. Only $5 Entry for this great event …Bracelets are ready for pick up at Hotel La Puerta Del Sol front office:)