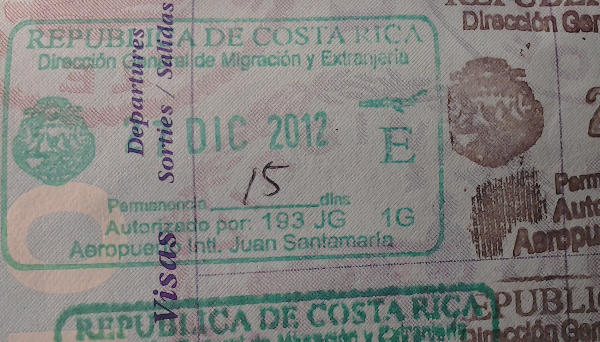 But that may be changing. We cannot ascertain if only single men are being targeted or it is also affecting couples, families and single women, as immigration officials are issuing stays of less than the usual 90 days.

One case in point is that of Danny, a frequent visitor to Costa Rica for the last six years. Danny is not a “perpetual tourist”, he does not live in Costa Rica, leaves every 90 days and immediately returns for another 90 day visitor stay.
Danny has been visiting Costa Rica once or twice a year, staying one or two weeks each time. His latest arrival was on Thursday when, for the first time, he was given only a “15 day” stay and not the usual 90.

The shorter stay does not inconvenience Danny, he has to return to the US next week. However, what if Danny wants to change plans and stay longer? And, although the Q has not been able to confirm other such cases, we have heard of several in the last couple of months.

“They are targeting the single male traveller with frequent visits to Costa Rica. I was prepared with my return ticket, as I had read on several forums/boards of people being asked, but a rude awakening on the 15 days. I was always given 90”, Danny told QCostarica.com.

What is disturbing here is that visits are being cut short and for no apparent reason.  The official Costa Rica tourism site  by the Instituto Costarricense de Turismo (ICT) does not mention the possibility that an immigration official may issue a shorter stay.

And for the most part it really isn’t a problem, tourists usually arrive in Costa Rica with a predetermined number of days/weeks stay and the leave.

In cases like Danny where his stay is limited to only 15 days and decides to stay in the country longer, there is hassle of having to visit the immigration office in San José and apply for an extension.

In the case of  Danny, in the interview with the Q there were no “unusual” circumstances leading to Danny’s stay being cut short of the usual 90 days.

In Danny’s case he can be called a “regular” visitor. He spends money on hotels, meals, entertainment, transportation, etc, like a good tourist, while visiting.

The difference between him and the ‘average” visitor is that he keeps coming back to Costa Rica. Isn’t that a good thing?

“If they (the immigration official) see many entry stamps in your passport they will cut your visit short”, speculates Danny.

In addition, Danny was asked – for the very first time – to present his return ticket out of Costa Rica. Most tickets are now “e-tickets”, which means that if you did not print out the e-ticket before leaving, it may mean a trip to the airline counter at the airport to get a copy to satisfy the immigration service.

QCOSTARICA - In the first 44 days of 2021, the Ministerio de Seguridad Pública (MSP) - Ministry of Public Security - reports a 62%...
National

QCOSTARICA - A member of the board of directors of the Instituto Costarricense de Acueductos y Alcantarillados (AyA) - water utility - Yolanda Acuña...
Travel

QCOSTARICA - The restrictions for travelers imposed by the United States, Canada, Mexico, France, Spain and the United Kingdom, six of the main sources...
Business

QCOSTARICA - The elimination of the daytime sanitary vehicle restrictions in less than a week, given the drop in infections and hospitalizations due to...
Health

QCOSTARICA - In total, 19 cantons in six provinces maintain a high risk of contagion by COVID-19, according to the last update from the...
Politics

QCOSTARICA - A cold push is expected to grip all of Costa Rica this weekend, with wind gusts of up 100 km/h and cooler...