Q COSTA RICA – It’s been more than a decade of waiting. Meanwhile, visitors to Monteverde continue to have to deal with a tough road, an 18 kilometre stretch that is gravel and rock.

But soon no more.

On Thursday the Consejo Nacional de Vialidad (Conavi) confirmed the signing of the contract to pave the road between Guacimal and Santa Elena, the road that connects to the Interamericana Norte (Ruta 1).

The Conavi said the contract was signed two weeks ago and would take 450 days from the day the contractor gets the green light to start. Though no start date was given, the Conavi says it expectsthe road completed by the end of 2018.

The project has a cost of ¢6.3 billion colones and according to the Conavi statement, it does not need to be countersigned by the Contraloria (Comptroller General of the Republic), since it is a direct contracting already approved, a process that is the reason for serious delays of many public works contracts.

According to the information released by the Road and Bridge Construction Management (of the Conavi), the project includes asphalting, construction of stabilization walls, slope protection, horizontal and vertical signaling and road safety protection systems.

For anyone who has been to Monteverde knows the ‘calvario’ (serious headache) the road represents.

The 18 kilometre stretch of road that leads to the paved road to the Ruta 1 can take up to an hour to travel, dealing with the rocks, steep incline and narrow stretches without a security barrier looking down a steep slope that is not for the faint at heart driver or passenger. And that is when the sun is shining. Add torrential rains, and….well you get the picture.

The alternate road from Tilarán of the Juntas de Abangares is no picnic either.

Danny Ramirez, president of the Monteverde Chamber of Tourism, in his opinion, the road has put to Monteverde at a disadvantage with respect to other tourist destinations.

“There are many agencies that hide it as a destination because of the deterioration that the state of the road causes its transport units. That leaves us at a competitive disadvantage, because it also increases the costs of transportation,” he said. 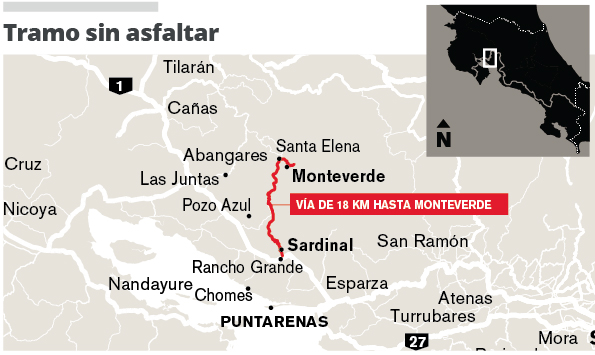 The promises for a decent road to Monteverde goes back to 2008, by then minister of Transport, Karla Gonzalez, who assured that Monteverde would have its asphalted road the year later.

In 2011, former Ministry of Public Works and Transport (MOPT) minister, Francisco Jiménez, was more cautious in his promise, assuring the residents who constantly demonstrated for the work that they would make the necessary improvements to allow light vehicles to travel without problems, but it would continue as a gravel road.

In 2013, the minister of the MOPT, Pedro Castro, assured that he would find the way (funds) for the one billion colones to replace the gravel and the ¢4.7 billion to pave it.

The most recent was in July 2014, then MOPT minister, Carlos Segnini, promised the contract would be going out for bid in 2015.