Ruta 39: The Nightmare With No End 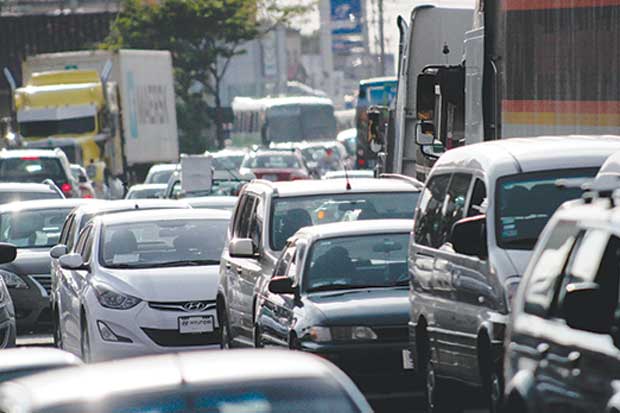 Rico’s TICO BULL –The Ruta 39, better known as the Circunvalación is one of the main traffic arteries of San Jose. It starts at La Uruca, moves south towards Pavas on the west, then through the Hatillos, Alajuelita and Desamparados, the moving north to include Zapote and San Pedor on the east side of San Jose to end at Goicoechea. This intersection branches towards Calle Blancos to the west and Guadalupe to the east.

Conceived at the beginning to be a complete ring road that avoids entering the center of the capital by the INVU and Ministry of Public Works and Transportation (MOPT) in the 1950s, 20 years would pass without any work being carried out.

The MOPT hired a US consulting firm, whose report finally suggested that it was no longer feasible to build the road in the originally planned location. This report suggested that the ring be more distant from the central San Jose, towards less populated areas. Finally, the 4-lane road began to be built in 1979.

Even though it (the road know today) initially fulfilled its mission, it has shown over the years that, due to population growth and indiscriminate possession of vehicles, it is not enough as a route to avoid the congestion or “presas” as it is called in Costa Rica.

The north section, between La Uruca and Calle Blancos which was a part of the original plan and never carried out, is now a vital link to help reduce the congestion that is a daily occurrence.

But it has been a long process and one that may someday see an end. But don’t it expect this nightmare to end anytime soon.

In the early 2000s the MOPT purchased the land to complete the road, but it had not proceeded with the eviction. In 2013, the Laura Chinchilla Miranda administration announced that expropriations were finally going to be carried out.

In June 2014, the government of Luis Guillermo Solis received the approval from the Comptroller General (Contraloría) to the construction contract for the northern arc. The Consortium Estrella H. Solis (no relation to the president) was awarded the contract by the Consejo Nacional de Vialidad, a division of the MOPT.

Today, in June 2018, the new government of Carlos Alvarado informs us there is a 92% advance on the expropriations. In numbers, that there still are 8 of the 100 expropriations to be settled before the project can move forward.

Blamed for the delay is the law that governed expropriations at that time. The law was amended to speed up the process, but.

“We have to re-believe in our ability to do public works. This is a project that has had a considerable advance, even so, we need the collaboration of the courts to move swiftly on the expropriations,” said president Alvarado this past week after a review and field inspection of the ancillary work, roads that will eventually connect to the northern arc.

However, the prez did not give any commitment as to timing.

No one knows better the project that Mendez. He was there 40 years ago. He is there today.

“It fills me with satisfaction that we are about to conclude this important work (…) which will bring about a change in urban mobility in the Metropolitan Area,” said Minister Méndez.

The built portion of the Circunvalacion has a daily traffic of almost 100,000 vehicles.

Forty years later we have basically the same roads, including the planned and unbuilt top end of the Circunvalacion.