COSTA RICA NEWS – It is hardly a sacrifice for people to seek a career in government. In some cases, such as an area director of the Health Ministry who earns more than his boss, the Health Minister, oddities of the payment scale result in distorted salaries. 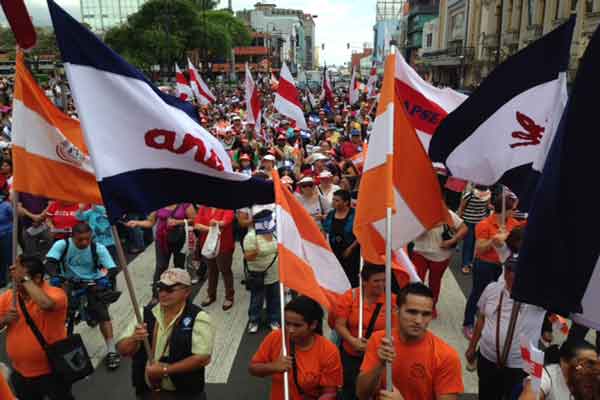 In other cases, the officials receive two salaries, one from the government and a regular salary from the University of Costa Rica. La Nacion broke both stories this week and moved Presidency Minister Melvin Jimenez to call a press conference to explain the inconsistencies.

But, Minister Jimenez was unable to explain just why the salaries are so incoherent. For example, the underling health director earns 5.7 million colonies per month, more than twice that of the Health Minister’s base salary. Ministerial salaries are regulated by a special budgetary body under the Finance Ministry.

La Nacion reported that President Luis Guillermo Solis had some trouble filling ministerial vacancies because of unpalatable salaries. When the paper reported the disjointed salaries, Minister Jimenez called a press conference but did not explain the anomalies.

But the case of two professors at UCR are most puzzling. They are being paid by the university while other professors who have taken government posts have resigned their academic salaries. It would appear that special negotiations were carried on between UCR and the Government.

Guillermo Santana, president of the government owned railway Incofer, is an engineering professor and researcher. Jimenez admitted that the government had negotiated the special deal. John Fonseca, Deputy Minister of Foreign Trade, is an economics professor still being paid by UCR.

“Ï don´t want to sever my association with the University but not because of income. I’m a new professor,” Fonseca explained. Santana explained that a family member has responsibilities and he could not afford to lose his salay. He is still teaching while carrying on his government duties part time.

But new Agriculture Minister Luis Felipe Arauz and Education Vice Minister Alicia Vargas, are both UCR professors and are paid by the government. But Jimenez denies that the special negotiations with the university opens the door for a discrepancy of salaries.

Putting his own spin on the situation, Minister Jimenez said that it shows a willingness of UCR to contribute to the government. University Rector Hennings Jensen denied that the arrangement did not represent damage to the UCR’s autonomy and permitted the “loan” of professors to government temporarily.

Comment: We all have to make firm decisions in life and one of those decisions may be whether we’ll work full time at a job or to take a new one. We realize that the President would like to have the best persons on his cabinet, but one foot in the academic camp and the other in government is not healthy.

We hate also to quibble with a person of the stature of Dr. Jennings, but it does bend the autonomy of UCR all out of shape. In one way, we can agree with Minister Jimenez –the arrangement doesn’t “open the door” to unequal salaries because that already is a mess. But this worsens a bad situation.

Article by iNews.co.cr. reposted with permission

QCOSTARICA - In times of pandemic, things change constantly, especially when it is necessary to tighten the belt to reduce the contagion of covid-19. The...
Business