The Brazilian company, OAS, that was awarded the concession contract for the San José – San Ramón section of the Interamerican highway (Ruta 1), has been widely questions in other Latin American countries for presumed low social environmental responsibility and corruption. 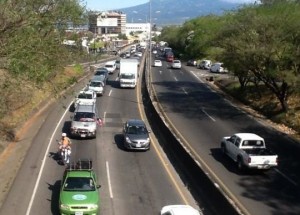 On Monday the government of Laura Chinchilla announced the approval of the contract by the Contraloría General de la República (CGR)- Comptroller’s office of the awarding to OAS a 30 year concession.

Reports since indicate that OAS has been invovled in “administrative irregularities” and alleged payments of bribes to politicians in Brazil, Peru, Ecuador, Bolivia and Chile.

In Brazil, OAS has been accused of committing irregularities in large urban works. According to the daily JusBrasil, irregularities were uncovered in the construction of the Rotary Foundation in Brasilia. In addition to other Brazilian companies, OAS is linked to strong allegations of corruption and influence peddling in Brazil.

The daily Globo Noticias in Brazil reports the corruption led to the collpase of a railway terminal.

Similar charges of corruption are alleged to have occurred in Peru and Ecuador, where OAS was involved in an engineering project of high environmental importance.

In Costa Rica, OAS is expected to begin work on the 58 kilometre section of the Ruta 1, between San José and San Ramón, within six months. The work that will take some 30 months to complete, when the Autopista General Cañas (La Sabana to the airport) and the Bernardo Soto (airport to San Ramón) will be a toll road with five toll stations, costing users up to ¢4.000 colones.

Currently the road had two toll stations, one on the Cañas, immediately east of the airport (Alajuela bound) which costs uses ¢75 colones (¢100 voluntary for using the left express lane) and southeast of Naranjo (San José bound) where drivers have to hand over ¢150 colones.

QCOSTARICA - Characteristic of the rainy season, we will see rain in the afternoons and nights in the Central Valley, the entire Pacific coast,...
Disasters