Incofer says conductor error may be the cause, the conductor of the rear train not maintaining the required distance between the two 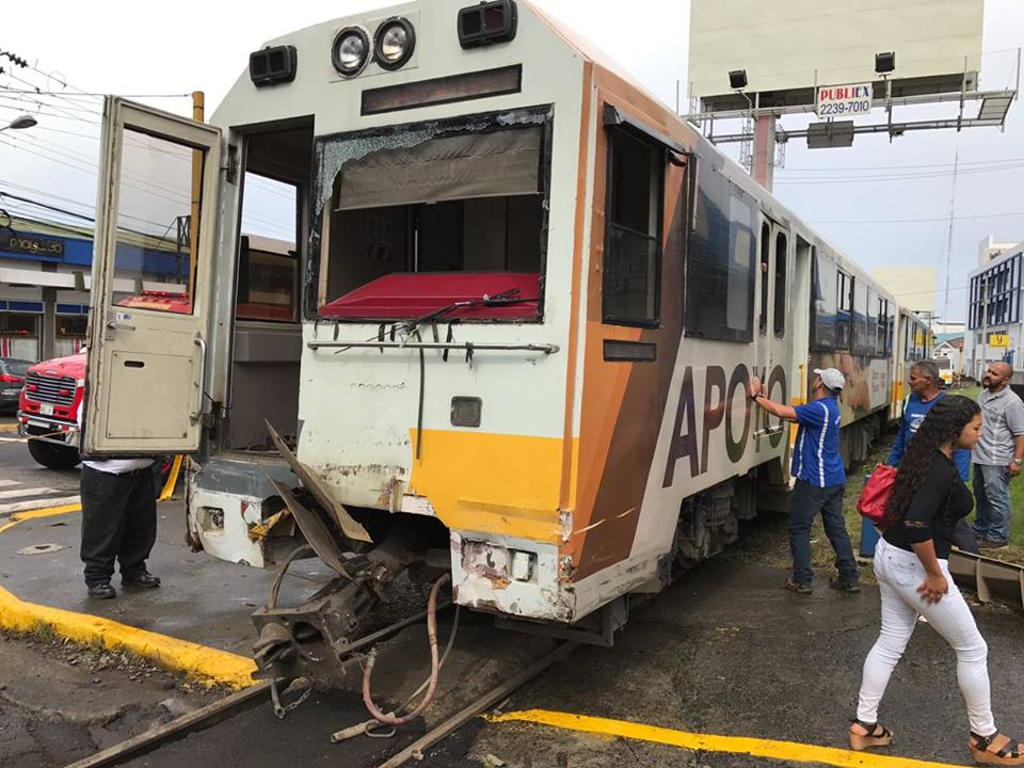 Trains are not like cars. They don’t brake like cars. They shouldn’t be driven like a car. Yet, a collision between two trains left 20 injured Monday morning in the are of the area of the former Consejo Nacional de Producción (CNP) and the Yamuni store on the west side of downtown San Jose.

Thirteen of the passengers on the morning commuter trains had to be taken to hospital.

Monday’s crash occurred shortly after 8:00am, when the lead train, eastbound from Pavas to the Pacifico train station, crashed into a vehicle on the train tracks, the second train slamming into the first.

Although the second train on the single track applied its brakes it couldn’t avoid hitting the first train, now stopped on the tracks.

The Instituto Costarricense de Ferrocarriles (Incofer) – national railway – in a statement Monday night said conduct error caused the two trains to crash into other. The Incofer said the rule for two trains traveling in the same direction, on the same track, is a minimum distance of 100 meters.

“It is presumed that the conductor disrespected the distance with respect to the other train, resulting in the collision”, said Isaac González, the Incofer transport chief.

The Incofer did not publicly release the names of the conductors, saying both are under investigation, and the conductor of the second train suspended.

According to Gonzalez, conductors know that they need between 50 and 75 meters to bring the train to a full stop at the posted speed of 25 km/h.  “Regulation stipulates that a distance of at least 100 meters must be maintained,” he said.

González added that in addition to keeping the distance, the conductor should be aware of the (train) cars in front. “When the train in front applies the emergency brake it does not give an alert to the conductor behind, but it is not necessary. Being so bulky it is easy to detect when they slow down,” he said.

How did it happen?

The Incofer said that a light vehicle appears to have crossed the railway in front of the former CNP building. The (first) train had to apply the emergency brake; however, the train behind could not stop in time because of the reduced distance between the two. Both were on the same track headed for the Pacifico station on the south side of downtown San Jose.

At the time of the crash, the train up front had four passengers, the train in back 22.

This is not the first time two trains have collided into each other, the last in April 2016, when two trains collided head-on, on the same track only a few kilometers west of this morning’s incident. In that incident, more than 100 people were hurt.

Although collisions between trains are rare, weekly the commuter train is involved in one or more accidents, the majority drivers not respecting the train.