Scapegoats: The Children of Xenophobia in Costa Rica

PanamPost – Costa Rica is well marketed — and thus internationally well known — for its stunning natural beauty. What isn’t so well marketed is the ugly undertone of xenophobia that exists in the small but opinionated Central American nation. 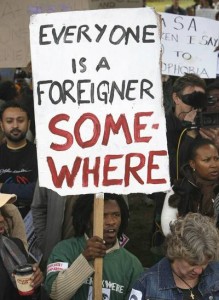 While discrimination is normally associated with two non-like parties, Nicaraguans in Costa Rica fall victim to the ever-expanding and concerning trend of intra-cultural intolerance.

Ticos still boast that they are ahead of other Central American countries in areas such as education, social security, and health care. However, the formidable issue the nation has had to address is the loss of their advantage, due to declining Costa Rican performance in those areas and other nations catching up.

With decline comes blame, and lots of it.

Being a hub for migration offers an easy out: applying culpability to those using the nation for refuge. However, rather than accept an accurate internal assessment — that Costa Rican exceptionalism is in decline — Ticos have favored a series of scapegoats, scapegoats that don’t fit with the self-applied culture of elitism they have for themselves.

The trend goes much deeper than statistics. It’s a dual-pronged rationale based on narcissistic ideologies and a lack of an internal plan going forward.

The country has always held itself in higher standing than other Central American nations. Erica Townsend-Bell, an assistant professor of political science at the University of Iowa, calls this Costa Rica’s “Whiteness.” The ideology doesn’t have to do with skin complexion directly — though Ticos are generally fairer skinned than elsewhere in the region — but rather with civility. Perceived superiority levels derive from areas such as urbanism, peacefulness, Christianity, and in being more democratic.

With this superiority complex in mind, those who are not deemed to qualify as “white enough” are seen as inferior. Nicaraguans, derogatively referred to as “Nicas” in Costa Rica and who make up the majority of migrants in Costa Rica, are the largest group unfairly saddled with the blame for the nation’s shortcomings.

What Townsend-Bell so articulately hits on the head is not that Costa Ricans hold themselves in higher standing than others in Central American but how much higher. From a practical perspective, we can see that even the decline in actual superiority or exceptionalism isn’t the root of the problem. Rather, in the Ticos’ eyes, it is what that decline represents: Costa Rica is becoming more “Central Americanized.”

“One of the key components of whiteness in Costa Rica — its opposition to the darkness and poverty of the rest of Central America — is fraying,” accentuates Townsend-Bell. Nicaraguans are targets because they are seen as the reason for the leveling playing field. Put differently, “Nicas” are “blackening” Costa Rica’s whiteness.

Placing blame on Nicaraguan immigrants is an act of convenience; their arriving to Costa Rica is not a new development. As such, assigning fault for recent concerns on long-term immigration rings hollow.

In the early 20th century, Nicaraguan immigration served a different role. With mostly men migrating to work in one of Costa Rica’s many export industries, locals used it as a tool to enhance the notion of Costa Rica as ethnically cultured and to reinforce their elitism and superiority in comparison to their neighbors.

With the Nicaraguan civil war ongoing in the latter part of the century, the reasons for emigration from Nicaragua changed, and so did Costa Rican attitudes.

With Costa Rican national debt reaching US$2.4 billion in 1981 — resulting in a suspension of all external debts — and a corresponding inflation rate climbing to an all-time high 108.9 percent in 1982, the doors opened for heightened xenophobic attachments that may even be more prevalent today.

Those downward economic trends, alongside no clear action plan on the part of Costa Rica, made Nicaraguans an easy target, says University of Costa Rica professor Carlos Sandova. “Costa Ricans are intolerant of and disrespectful towards Nicaraguans because we have found ourselves without a well-defined blueprint for the future of our nation.”

The irony of misdirecting responsibility for the decline is that the same level of diversity or disruptive culture Ticos attach to Nicaraguans already exists within Costa Rica itself.

Sandova points this out and says the justification for blame against Nicaraguans could very easily be attributed to Ticos as well.

With an exceptional view of themselves, accurately identifying internal problems has proved difficult for Ticos. Forget economic or social decline; in scapegoating Nicaraguans, there is also a decline in Costa Rica’s human exceptionalism.

QCOSTARICA - Costa Rica's legislature approved, in the first debate, a bill that reduces the minimum amount that a foreign pensioner or rentier must...
Infrastructure