Costa Rica Star  – We set out down the beach under a leaden sky stuffed with clouds. It was 8:00 at night, and at first it was hard to see, with the nearly full moon sliding in and out of clouds; but soon our eyes adjusted to the dimness. A light mist began to dust us, and not a soul stirred nearby. 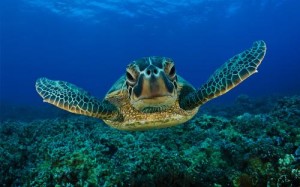 We were on sea turtle patrol.

Five of us were decked out in dark colors to blend with the night. Sea turtles don’t like bright lights – and, ergo, light-colored clothes – which distract and possibly dissuade them from coming ashore to lay their eggs. Cell phones on low ring, and backpacks and water bottles in hand, we started along the smooth, dark sand for a 6 km reconnaissance of Matapalo Beach.

Matapalo Beach, south of Manuel Antonio, Costa RicaThe long, tree-lined Matapalo Beach is halfway between Manuel Antonio to the north and Dominical to the south on Costa Rica’s Central Pacific Coast. There is nothing here but a small community, unspoiled beach, and the Matapalo Beach Sea Turtle Conservation Project. Run by the non-governmental, not-for-profit Association of Volunteers for Service in Protected Areas in Costa Rica (ASVO), the project protects Matapalo Beach for the three species of endangered sea turtles that come here to lay their eggs.

The Sea Turtle Conservation Project began in Matapalo in the 1990s. In 2005, ASVO took over and used its large volunteer base, in the form of college students from both Costa Rica and abroad, to grow the project.

Every year from June 1 to the beginning of December, several hundred Olive Ridley, Hawksbill and Pacific Black turtles come to Matapalo Beach to nest. The peak arrival time is from August to October. Only female sea turtles return to the beaches where they hatched; male turtles never return to shore.

Turtle eggs are protected in a hatcheryOn patrol, we were watching for any movement or tell-tale tracks across the sand that signal the presence of a sea turtle laying her eggs. We also were watching for the possibility of poachers coming to steal turtle eggs or kill the turtles, though that isn’t as frequent at Matapalo as it is on Costa Rica’s Caribbean Coast, assured Daniel Segura, head of the Matapalo Sea Turtle Conservation Project. “Here people don’t kill turtles for meat. Sometimes people steal eggs, but we have excellent relations with the Coast Guard and the community here,” Segura said. Turtle eggs are thought to be an aphrodisiac and are stolen for consumption and sale.

Sea turtles in the world are threatened by poachers, pollution in the water including plastics, fishing lines (causing entanglement and drowning) from shrimp nets and long-line fishing, the loss of habitat due to beach development, and global warming causing the sea water temperature to rise. Last year, volunteers at Matapalo found 20 dead turtles.

Turtle baby hatchingProject volunteers patrol 5.4km of Matapalo Beach every night during turtle season; they monitor the turtle hatchery 24 hours a day, and do beach clean-up. When a nest is found, volunteers wait for the sea turtle to return to the ocean, and then recover the eggs carefully in plastic bags to bring them to the hatchery to be safe from predators. Incubation lasts from 45 to 60 days and a nest will have from 80 to 150 eggs. Female turtles lay two to three nests per season.

Around 80 to 100 baby turtles hatch from the average nest. However, only one in 1,000 sea turtles survives to adulthood. On average, turtles live to about 50 or 60 years. According to ASVO data, they have freed tens of thousands of baby turtles over the years. To celebrate the turtle project and baby hatching, an annual Turtle Festival is held on Matapalo Beach in late November with music, food, parades, surfing contests and a small fair.

Volunteers come from all over the world to help at the Matapalo Beach Turtle Conservation Project. The night I was visiting, there were 46 volunteers in house – from the USA, Canada, England, Spain, New Zealand, Belgium, Colombia, Venezuela, and Costa Rica. There is space for 60 volunteers. Help is needed in the turtle nursery, patrolling the beach, beach clean-up, and teaching turtle conservation to schoolchildren and the community. Volunteers stay from one week to six months (or longer). Corporate groups from Costa Rica are welcome for weekend volunteer projects.

Tour cost is $25 per person; three or more in a group and the price lowers to $20 each. All funds go directly to the turtle project.

What to bring: Wear dark-colored clothes apt for walking the beach at night and comfortable shoes. Bring a water bottle, small flashlight (can only be used on the road to get to the beach and not out on the sand), and camera (no flash allowed). No smoking or perfumes allowed – turtles have a sensitive sense of smell and can be repelled by strong scents.

Where to stay in the area:

Portasol is a key supporter of the Matapalo Beach Sea Turtle Conservation Project. Said Portasol owner Guillermo Piedra about the project’s tour: “Offering this tour is very important for our guests, to inform them about the importance of preserving endangered species and their significance to the environment. The Matapalo Project is aligned with our community work and our mission and vision to work toward a better world.”
– See more at: http://news.co.cr/sea-turtles-arrive-on-costa-ricas-matapalo-beach/24086/#sthash.kskNg6vb.dpuf

QCOSTARICA - Emilia Navas will not be removed from her position as attorney general, after calls for her to step down due to her...
Crime

QCOSTARICA - Sinpe Móvil is easy to use. From your phone, you can send money to friends, family and pay for things. Or receive...
Guanacaste