Sinking of the Circunvalacion Costs Us All 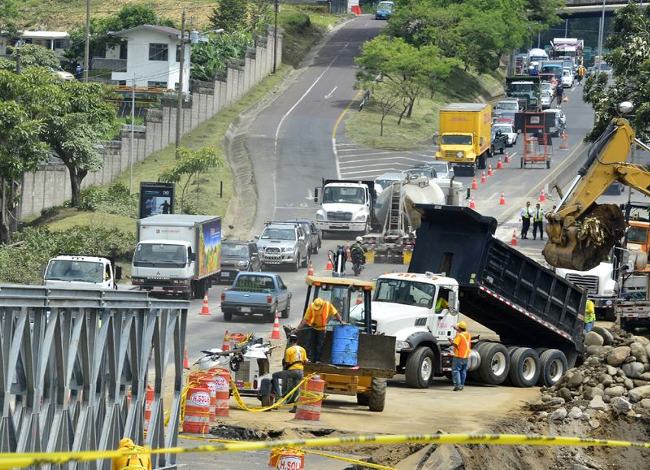 The first of the two Bailey bridges to be erected on the Circunalación is almost complete, as work crews work feverishly to erect the second and the construction the on and off ramps.

Meanwhile, not only drivers face constant traffic congestion, but users of buses and taxis, in the end costing us all.

Bus companies serving the west end of San José report delays of up to 30 minutes on routes like Pavas, Sabana and Escazú. On other routes, like Tibás and Santo Domingo de Heredia, with service to downtown San José are reporting delays of up to 15 minutes.

Taking a taxi through the area can mean the usual fare to be almost double in some cases, as alternate routes through the Hatillos and Alajuelita are totally collapsed.

The congestion in traffic can be also be left in the area of Barrio Cuba, Los Anonos, Sagrada Familia and San Sebastián, especially in peak morning an afternoon rush hours.

Adding to the complete chaos is “pay weekend”, when Ticos take out their cars instead of using public transport, having money to fill the gas tank.

According to MOPT officials, the two Bailey bridges should be completely installed by Monday morning.

Work to repair the problem will then continue for the coming months, but it should not affect traffic through the area.