It’s still too early to tell if President Luis Guillermo Solís is sincere or just being popularist. Yesterday the President said his government is not going to take advantage of the World Cup fever that has struck the country to increase prices of basic services. 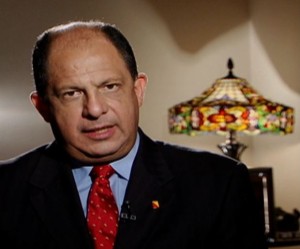 The statement came after questions by the media on the upcoming public hearings to change postpaid cellular internet charges from a flat fee to a per download.

“Using the triumph of La Sele to raise the price of basic services has not entered my head”, said Solís.

Costa Rican governments have in the past used major distractions in public attention to do what governments do. And the concern this time around is Superintendencia de Telecomunicaciones (SUTEL) public hearings scheduled for July 1, right smack in the middle of World Cup party mode.

“The government is not going to take advantage of the World Cup to put people against the wall, because people are not stupid,” said the President.

The President added that he will be meeting this week and next with various sectors to present a propsoal to lower the price of electricity. And at the same time be asking the Autoridad Reguladora de los Servicios Públicos (ARESEP) to modify (lower) rates.

QCOSTARICA - The residents of the Central Pacific endured heavy rains Monday afternoon, June 7, hardest hit the town of Quepos, where the streets...
Politics

QCOSTARICA - Costa Rican President Carlos Alvarado is just another citizen when it comes to covid-19 vaccination, given his young age and good health,...
Coronavirus