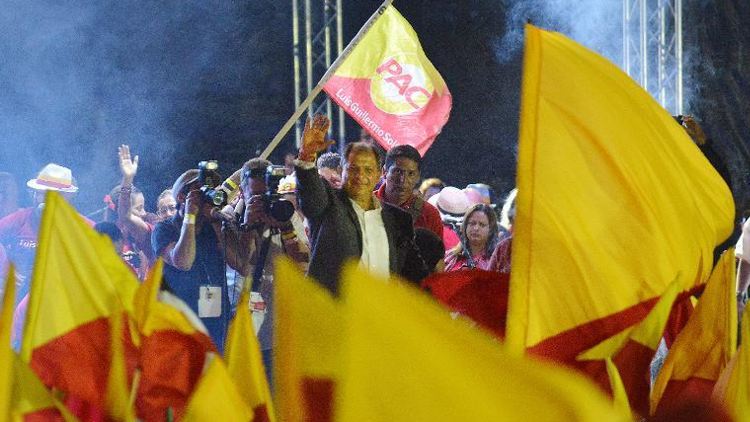 With 78% of the votes cast on Sunday’s run-off election, the 55 year old became the first third-party candidate, taking the Partido Accion Cuidadana (PAC) to victory.

“I want to be a president close to the people”, Solís

[/one_third]The win breaks the monopoly of traditional parties – the Partido Liberacion Nacional (PLN) and Partido Unided Social Cristiana (PUSC) – that have ruled the country alternatively since the “Second Republic” in 1949, while PAC is young party, founded 13 years ago.

Solís, a little known academic, came out of last place in the polls to win the first round election on February 2, beating out ruling party rival, Johnny Araya, by a 1% margin. Costa Rica’s constitution requires a candidate to obtain at least 40% of the votes to be declared president, forcing the run-off vote on April 6, in what is being called an unusual election. Unusual because the PLN candidate withdrew from campaigning one month before the vote, paving the way for a PAC win.

“As president, I intend to carry out that change.”

Solís takes the presidency on May 8 from Laura Chinchilla, the first female president and a government mired in corruption scandals.

On Monday, outside his modest condominium residence in Barrio Escalante and without taking a break following the election, Solís said one of the first acts as president-elect is ask for a report on the state of the nation from the current administration.

“I feel overwhelmed by the responsibility but I will fulfill it scrupously, I want to be a president close to the people, as I was during the campaign”, were the words of Solís.

At a press conference Monday, the president elect said, “we will be strict and thorough in our task to understand the current state of the government left to us, we will be seeking accountability and will tell the people in what condition the farm (sic) if being handed over to us, but not in bad spirit or political revenge, rather with liability”.

Challenges facing Solís is the fragmented Legislative Assembly, in which the PAC has only 9 of the 57 legislative seats. The president-elect will also face a burdening fiscal deficit and a road network that puts the country to shame, among others.

Solís will have to demonstrate he has a conciliatory nature and knack for calm dialogue.

Solis has a solid academic background and holds a history degree from the University of Costa Rica (UCR), as well as a Master’s in political science and sociology from Tulane University in the United States.

He made a name for himself as a researcher at FLACSO, a renowned Latin American social sciences institute, and as a program director at the University of Costa Rica.

Between 1986 and 1990, he served as chief of staff in Costa Rica’s foreign ministry, where he worked on the design and promotion of the Central American peace plan for which former president Oscar Arias Sanchez won the 1987 Nobel Peace Prize.

He also was secretary general of the PLN in the early 2000’s, but quit in 2005 in disgust over corruption and the party’s embrace of neoliberal policies.

Solis, who is married for the second time to a Spanish woman, is the father of six children.

QTECH - Whether due to the global economic crisis caused by the Covid-19 pandemic or due to shortages of electronic components, raw materials, factory...
Corrupion