The dispute began at about 4:00pm on Avenida Segunda (Second Avenue), between Calles 6 and 8, 100 metres south of the Mercado Central, at the corner of the Banco de Costa Rica main building. 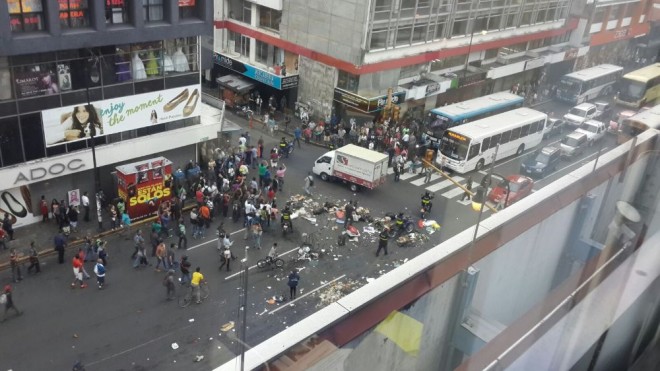 According to Marcelo Solano, chief of the San Jose Municipal Police, the violent encounter occurred when, during regular inspections, police began seizing merchandise from vendors or forced them to abandon their activity from sidewalks and the boulevard.

During the confrontation a “garbage war” broke out, cardboard boxes flying everywhere, garbage bags and food scraps strewn across the Avenida, blocking traffic.

By 5:00pm, authorities had the situation under control, with the detention of seven people: four women and three men.

Solano said that police monitor the street vendors, taking action against those who appropriate public spaces. “The idea is that people can walk through a secure capital,” said the police chief, who confirmed the operations will continue.

The police chief added that yesterday’s brawl was headed by a group of vendors with whom you cannot dialogue, “rebels who disturb order and social peace.”

Estimate are some 1,600 street vendors mainly concentrated in the downtown area.

The battle between street vendors and police has a history of more than a decade long.

Vendors set up temporary sales on the sidewalks and the boulevards, quickly picking up their merchandise and abandoning the spot at the presence of police. Spotters call out signals to warn vendors. 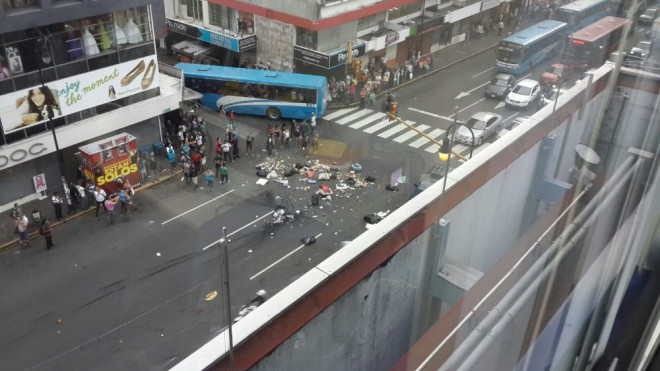 - Advertisement -
Paying the bills
Previous articleTicos Shipped Cocaine In Boxes of Yuca and Pineapple To The Italian Mafia in The U.S. and Europe
Next articleJust When Traffic Couldn’t Get Any Worse Between Heredia and San Jose