Students learn the art of opposition in Nicaragua 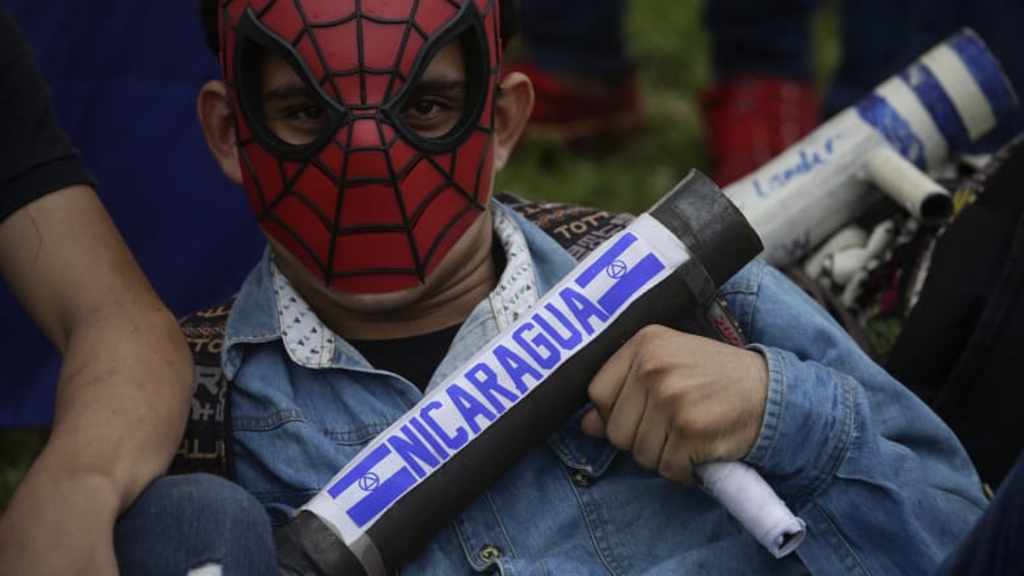 Managua: Hector Saballos, a member of the underground student movement, sits at a table in a safe house planning how to deliver rice, beans and medicines to friends who are in hiding. His boots are stained with blood, and his finger is broken from a recent shootout. He is worried about his girlfriend, who is in the hospital recovering from gunshot wounds.

A few months ago, Saballos, 29, was studying mechanical engineering. When the government of President Daniel Ortega announced changes to the social security system, setting off protests throughout the country, Saballos joined the marches. As security forces began to kill protesters, he manned the barricades, fighting with mortars, guns and rocks.

Now he is a wanted man.

“I had no preparation for this,” he said. “I have no military or tactical training. I grew up on a farm, so I do know how to use a gun. But Ortega is destroying human rights in this country. He is ignoring the separation of governmental powers. We can forgive much of what he has done, but we can’t forgive him for killing his own people.”

Students are at the heart of the movement opposing Ortega, who has been in office for 11 years and was last re-elected in 2016. In the past several years, Ortega has grown increasingly authoritarian, punishing those who speak out against him and cracking down on protests. More than 300 people have been killed since the demonstrations started in April, many of them young people, according to human-rights groups.

Students have been prominent in Nicaraguan politics for decades, with university campuses acting as centres of activism during the Sandinista revolution that triumphed in 1979, driving out dictator Anastasio Somoza and bringing Ortega and his comrades to power. Ortega was voted out of office in 1990 and returned to the presidency in 2007.

Until recently, though, students have not taken centre stage in opposition movements, although they at times engaged in issues like the environment.

“I thought they were just millennials who cared mainly about video games and lived their lives online,” said Marie Antonia Bermudez, a literature professor at the University of Central America (UCA). “But I was wrong.”

With Nicaragua’s opposition parties weak and divided, students have assumed a leading role in the protests. In the spring, they started taking over the universities, building barricades to fight off police and pro-government militias. Military forces have recently moved in and occupied campuses, but the students have achieved an iconic status among many Nicaraguans. CDs with songs like “Gracias, estudiantes” can be bought in local markets. Graffiti lining the streets of Managua praises the courage of the young protesters.

The demonstrators have demanded Ortega step down and early elections be held.

Ortega has claimed his political opponents and drug cartels are behind the fighting and insisted he will stay in office until the 2021 elections. International and local human-rights groups attribute most of the violence to government security forces and their allies.

For students, the crisis gripping the country has meant a complete disruption of their lives. Most universities have been closed for three months. Many scholarships have not been disbursed. Many students have returned to their families in the countryside because they have no money, and with the economy in a downward spiral, there is little chance to find work. Others have fled the country.

Vinicio Gonzalez, 24, known in the student movement as “Yankee” because of his light skin, was a dance major at UCA before he joined the rock-throwing demonstrators confronting the police. He had planned to perform at a folkloric dance festival in Costa Rica this summer. Instead he is hiding out with Saballos at the church.

“Rocks can’t do anything against guns,” he said through tears.” But I have to take these risks. Our friends have been killed, and our rights taken away.”

Kim Angeles, 23, had a full scholarship to UCA and was studying sociology. She now spends much of her time at a safe house and tells her parents she is going to church when she attends protests.

“My biggest fear is being raped,” she said. “We are just students. We don’t know how to fight.”

In this divided country, Angeles’ situation is complicated by her father’s and uncle’s support of Ortega.

“My father thinks that students in the resistance should be killed,” she said.

Regis Gonzales, 20, is a medical student who helped treat students injured during a protest. He said he was arrested and questioned for 12 hours by the police.

“After they questioned me, they started writing on a piece of paper. I looked down to see what they were writing. They had written ‘terrorist’ by my name. I was shocked,” he said.

He was released and continued to attend protests. Now, he said, police have issued an arrest warrant for him, accusing him of being a terrorist. He has been living in a safe house.

“I will continue to fight against the political oppression,” he said. “We won’t forget a single drop of blood spilled by our friends who were killed.”

Professors also are facing hardship. Many have not been paid for three months since classes have been suspended, and they cannot go to their offices or do research in the library.

“I am living on savings,” said Bermudez, the literature professor. “I am attending the funerals of my students. My entire department has fled to Costa Rica.”

Sergio Ramirez, winner of the 2017 Cervantes Prize, the most prestigious literary prize in the Spanish-speaking world, said pro-Ortega student groups have quashed intellectual inquiry and made voicing opposition opinions dangerous on campuses.

“They know that if they say anything against Ortega, they won’t get scholarships, ” he said.

Bermudez, the professor, said the students operate differently than her generation did during the Sandinista uprising, which was inspired by leaders of the Cuban revolution like Fidel Castro and Che Guevara.

“They see our generation of Sandinistas as failures. They don’t want to create great leaders like Che or Fidel,” she said. “They operate more as a group. We used to say “Liberty or death.’ But they say ‘Be free … and live.’”