Success! I am now a legal Costa Rican resident! 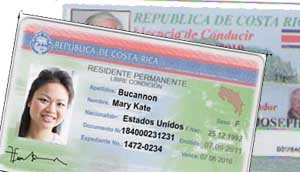 Success! The witch is dead, I got her broom, her ruby slippers, her DNA, and her mother’s maiden name. I am not going home, alas, to Washington, but at least I am going home to Potrero, as a legal resident of Costa Rica.

My dance with the Costa Rican immigration department has finally concluded for now. Not forever, but I now have a cedula, proof of my legal residency in Costa Rica. It is good for 2 years, then needs to be renewed, and in 3 years I can apply for permanent residency and the paperwork shall be done. The word for paperwork in Spanish is “tramites”. It should be “trauma-tes”.

I was notified in May that I had been approved for residency. I was given an appointment at immigration for December 6.  There is no way to make an appointment online or by phone. My attorney had to send a runner who spent 5 hours (!) in line in order to obtain the appointment.  In addition, I had to enroll for the universal health care in Costa Rica, a two step process. First I had to go to the County Capital, Santa Cruz, to register, and then I had to go to the small local clinic to get a “carnet,” a registration card. In order to get the carnet, I had to arrive at the clinic 2 hours early (7AM).  I also read on the US Embassy site that a US citizen who wants residency in Costa Rica has to register with the STEP program of the State Department, and this registration needs to be notarized at the Embassy for $50. I did all this, but it turns out that neither the carnet nor the notarized document from the State Department was requested at immigration.

What nearly stopped me was that my attorney had deposited required fees for my immigration into the same account he had used for many years. Three fees went into the only bank account that was mentioned by number on the letter approving my residency. WRONG. It turns out that two of the fees had to go into a different account that was NOT mentioned by name or number on the approval letter. Immigration had made a mistake! The young man at immigration sighed and said his office was closed on Fridays, and I would have to pay the fees into the correct account and return … 4 days later. My assistant and I took a flying taxi to the bank, to discover it closed at 4, and then we flew back to the immigration department where I put my attorney on the phone with the young administrator. I don’t know what my lawyer said, but the next thing I knew, we had an agreement – I would go to the bank to deposit the money in the correct account (the official handwrote the account number on my residency approval letter) first thing on Friday morning, and then I could return to his office for a photo and to receive my cedula. The immigration office was open on Fridays after all. It all went flawlessly from there. I made the payments, returned to immigration, we barged into his office, he took my picture, and an hour later, I was given a small pink card with my official recognition as a Costa Rican resident.

My attorney, Sr. Luis Alvarez, is a true good wizard. Without him, I would have been lost on numerous occasions. As I sat in line at immigration, watching the huge lines of people, families, and very young babies, surrounded by uniformed guards with hand guns and machine guns, I felt kinship with all of those people all over the world who are trying to make a new life for themselves, enduring meaningless and strenuous difficulty that seems designed only to frustrate, confuse, and finally deter them. Most people are not as lucky or as privileged as I am. But we all want the same things, a safe place to live, good jobs, security, escape from bad governments, and in general, a better life.

Every person who is not of Native American descent in North, South, and Central America comes from people who were foreigners. Some were brought as slaves, involuntarily. They have the hardest lot. Some ran away from famine, religious persecution, war, and poverty. Some people, such as certain Nazis after World War II, came to avoid prosecution for war crimes. Others sought wealth, gold, silver, land, or jobs. Most of the population of the New World came from slaves, refugees, and immigrants. I think that sensible immigration reform policies need to happen quickly, not only in the US, but in other countries as well, so that people can move about, trying to make their lives better. As long as people are well meaning and want to add value to their new homes, wouldn’t it make sense to make the process benevolent? And shouldn’t countries agree on reasonable standards, so that people know what to expect and can meet those expectations?

The Statue of Liberty stands as an emblem of sensible immigration policy. Her words sing of hope:

“Give me your tired, your poor, your huddled masses yearning to breathe free. The wretched refuse of you teaming shore. Send these, the homeless, tempest-tossed to me, I lift my lamp beside the golden door!”

The New Colossus by Emma Lazarus

The US used to be that symbol of hope and freedom, but recently a presidential candidate spoke of “voluntary self-deportation” for illegal immigrants, and the US still lacks a coherent and benevolent plan. Costa Rica was founded by Spanish conquistadores with bad luck.  They found no gold, no silver, difficult terrain, and no native labor force. The indigenous population died of European communicable diseases. All immigrants had to work hard for a living. There was a brief period slavery, and a period of encomiendas, or indentured peasants.  For the next 300 years, immigration to Costa Rica was relatively easy. People came to Costa Rica from Italy, Spain, China, Jamaica, Germany, and of course North America to create a unique society. It was not easy.  Building a railroad through the rainforest of Limon Provence cost the lives of countless people, many Asian.  Carribean descendents of African slaves faced discrimination and poverty.  However, by 2010, 96% of Costa Ricans defined their race as “mixed.” The military was eliminated, and an entire society had access to free healthcare, education, and suffrage. The Ticos were rated the happiest people in the world by three different international agencies in 2010.  What is happening now to make the society so difficult?

In a few short words: Drugs. CAFTA. Globalization. Inequality. Illegal immigration. Human Trafficking. Fear. Corruption. I bought a T shirt in San Jose that says: “Costa Rica – the happiest country around the world.” How long do you think that will last?