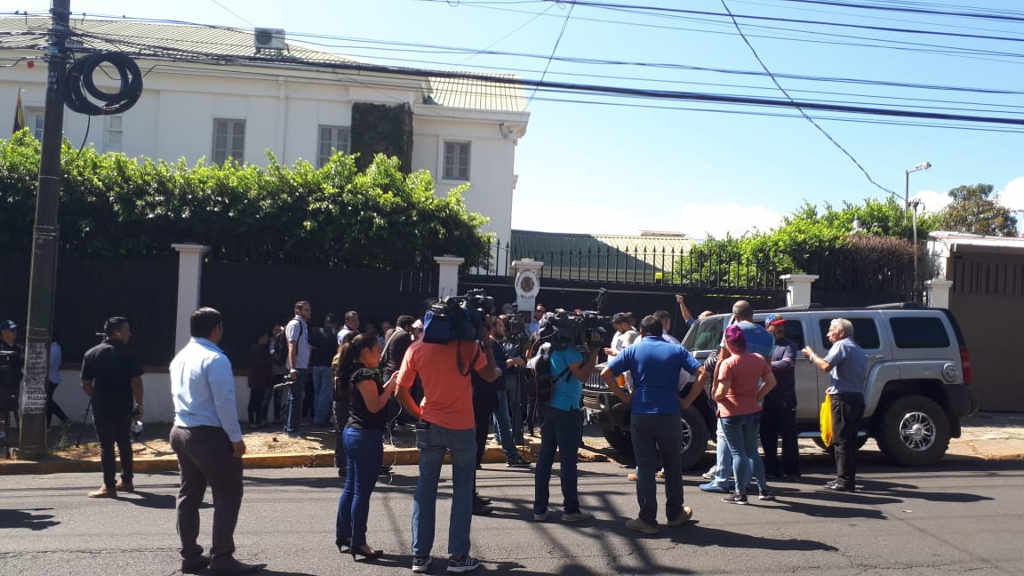 Supporters of Juan Guaidó and Nicolás Maduro clashed Wednesdau morning outside the Venezuela embassy in Los Yoses, on the east side of San Jose.

The clash occurred after diplomatic officials of Guaidó, the self-proclaimed president of Venezuela, took possession of the Embassy of Venezuela in Costa Rica, thus disregarding the 60-day period that the Costa Rican government had given Maduro officials to leave the country.

The representative of Guaidó, María Faría, clashed with officials of Maduro who were preparing to begin their work day. A significant number of Venezuelan citizens were present at the diplomatic mission, as well as some Costa Ricans.

The Ministry of Foreign Affairs censured the actions of Faría and her group.

“The Ministry of Foreign Affairs deplored the unacceptable entry to the headquarters of the embassy, by diplomatic personnel of Juan Guaidó.

“For the Government of Costa Rica, such a procedure is unacceptable because it injures elementary diplomatic norms of respect and trust in relations in the international community; and above all, international law,” said Deputy Foreign Minister Lorena Aguilar.

The Government of Costa Rica has recognized Juan Guaidó as interim president of Venezuela, and Maria Faria as the new ambassador in the country.

Through a press release on February 16, Faria said Maduro officials would not let her take possession as an ambassador.

Venezuela and Colombia to reopen borders

QCOLOMBIA – Venezuela is to reopen its border with Colombia, Venezuelan...
Read more

QCOSTARICA - Given the increase in new daily cases...
National