Surviving a Snakebite in Costa Rica

For many people, no creature evokes the kind of disgust and horror that snakes do, and this country has an abundance of slithering serpents known to have deadly dentures. 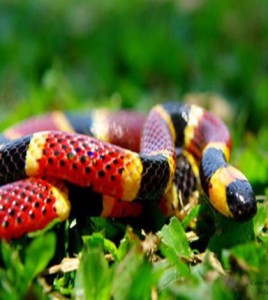 But the reality is that snakebites are few and far-between. On average, 504 people are bit per year in all of Costa Rica, according to a review of medical facility data by Mahmood Sasa from the University of Costa Rica. And thanks to the advent of powerful and very toxic antivenins, most snakebite victims, like Pelada resident Sophie Ballegeer, survive the experience.

What to Do If You Are Bitten

But what if the unimaginable actually happens? Keep calm.

If you’re bitten, go to the hospital immediately. Do not try to suck or apply pressure to the bite. Only hospitals keep antivenin in stock because the antidote has bad side effects, so it has to be administered in a facility which can monitor and control the effects.

Coral Snake – Black, yellow and red banding across the body, extremely venomous. Its very small teeth and meek disposition mean that it rarely bites, and it cannot bite through leather and other tough materials.

Fer-de-Lance –  French for “spearhead.” It has black, brown and green mottled colours with dark blotches along its back. It is considered to be one of the most dangerous snakes in Costa Rica.

Eyelash Viper – Also called the “Bocaraca” in Spanish. The eyelash viper can have several color variations and combinations of red, yellow, brown, green and pink. It is a small, tree-inhabiting snake, averaging about 2.5 feet in length, but don’t let the size fool you— its bite is still dangerous.

Tropical Rattlesnake – “Cascabel” in Spanish, for its rattling sound when disturbed. This rattlesnake is one of the larger species of venomous snakes in Costa Rica. Its venom is neurotoxic, very strong, and has effects on the operation of the eyes– some bite victims go permanently blind from late or inadequate treatment.

Bushmaster – The king of venomous snakes in Costa Rica can reach lengths of up to 8 feet. It is easily the largest venomous snake in the country and has an added danger of being able to strike with multiple bites. Luckily, it’s a nocturnal predator and usually will be avoided by people for this reason.

With report from By Giordano Ciampini, Voice of Nosara

TODAY PANAMA – With a sideways view of the syringe, nurse Violeta Gaona received the first dose of the vaccine against covid-19 in Panama...
Reports

QCOSTARICA - 50% of the tax revenue collected by the Ministry of Finance is used to pay the salaries of public employees, according to...
News

How a new generation of global drug lords emerged at the end of the 1970s, in want of both money and power,  changed the...
Health

QCOSTARICA - The Minister of Tourism, Gustavo Seguro, announced this Tuesday afternoon an agreement for private laboratories to help in conducting covid-19 tests for...
Health

QCOSTARICA - Between the different hospitals of the Caja, an average of 20 land transfers and at least one air transfer of patients with...
National

QCOSTARICA - Strong winds, generated by the influence of cold push number 12, prevented the firefighters from controlling a fire in vegetation registered in...
Photos of Costa Rica