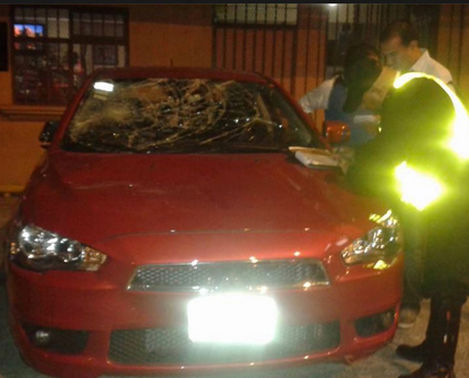 QCOSTARICA – It was just minutes before midnight Friday, just eight hours after the Uber service began operations in Costa Rica, amid opposition by taxi drivers and the government repeating that service is illegal, a group of taxi drivers pursued and damaged the vehicle of driver, looking to earn extra money.

The driver, a 32 year-old man who asked not to be named, told La Nacion that he got the call, by way of the Uber app, to pick up a fare in the bar area of Barrio Escalanate, in San Jose. “I don’t know who he (the customer) is. They (customers) know the colour and plate number of the car and see a photo of the driver. I arrived at the location indicated on the app, the man got it in, at the same time a taxi drove by. He (the taxi driver) realized I was a Uber driver, because I had a large cell phone and the application open,” he said.

The Uber driver says the taxi driver began following him, soon there was another, then another and yet another, in total three or four taxis surrounding him now in the area of Calle Blancos, following to Cinco Esquinas de Tibas.

The driver says he noticed his customer calling 911 when it was visible that more taxis where joining in the pursuit.

Although the driver says he was able to escape the pursuit by driving the wrong way at one point, he was finally blocked in and the taxi drivers, five or six by now, began to kick the vehicle, throw stones and one came at it with a bat.

“They broke the windows, the lights. There were many people looking on, but none offered help. I pleased with them, told them ‘I would not do it again, offered them money’. They just kep asking that the customer get out, but he didn’t want to. There was no way to negotiate,” said the Uber driver.

A witness told La Nacion, “two taxi drivers surrounded the man in the car, one in front, the other at the back. They got out of their cars, starting kicking the car, one with a baseball bat and broke the windshield; they climbed over the roof of the car, broke the headlights. We all came out to see the violence, that is when they took off.”

Uber has said that it will help drivers. Rocio Paniagua, spokesperson for Uber in Costa Rica and Latin America, said that they are still in the process of verifying the driver and in the event he is affiliated, the company will cover the damage to the 2016 Mitsubishi so that it can be back in service as quickly as possible.

The deputy minister of Transport, Sebastian Urbina, said the ministry strongly condemns the this and any act against Uber drivers.

Urbina has been accused of inciting taxi drivers to take the law in their own hands to stop the Uber from providing service in the country.

“I never incited violence, not have I asked taxi drivers of this country to take action against Uber drivers,” said the deputy minister in a statement released by Casa Presidencial.

Asked if he plans to continue to be a Uber driver, the man said, “I do not know, it could be a month before the car is repaired”.

QCOSTARICA - The investigation into alleged bribery of public officials in exchange for contracts for road works, received help from informants within the Consejo...
Weather