Teachers To Continue Their Strike

Thousands of students are expected to go a second day without classes, this due to a strike by teachers demanding the Ministry of Education pay their salaries.

Today (Tuesday), for the second day, teachers are expected to heed a call by their unions the Asociación Nacional de Educadores (ANDE), the Asociación de Profesores de Segunda Enseñanza (APSE) and the Sindicato de Trabajadores de la Educación Costarricense (SEC), to take to the streets. 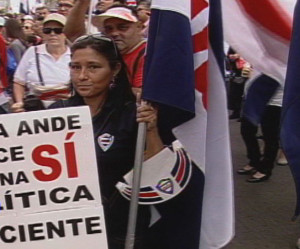 Some teachers say they have not been paid their salaries since the beginning of the school year in February, while others have yet to receive salaries for last month.

In some schools, only one or two teachers are holding classes. In larger schools, a few more teachers are present in the hallways, but not enough for a normal school day.

“I am not here (protesting) to harm my students…I have to borrow to pay for my buss” Yorleny Espinza, who has not received a salary in months, told La Nacion on Monday.

The Ministry of Education (MEP) admits the problem and Education minister Leonardo Garnier said Monday he agrees that anyone who is not receiving their salary should be mad, but asked teachers to be patient that their salaries will be paid by May 14 and not blame the new administration that takes office on May 8.

Last month, some 1.700 teachers were not paid their salaries and hundreds say they have not been paid since the start of the school year.

Apparently the error is because an error in data migration to a new payment platform, through the Ministerio de Hacienda (Finance ministry), known as Integra2. In the process, new teachers were excluded from the payroll.

Garnier said on Monday that the MEP is working around the clock to correct the problem and that all wages will be paid on May 13.

In spot interviews Mondays some teachers said they have heard all this before and expressed their displeasure, vowing to continue to strike and that the wage payment problems will continue despite assurances by Mr. Garnier, who leaves office on May 8.

Gílberth Díaz, head of the SEC, said that protests will continue all week throughout the country.

In San José, teachers are again expected to gather by the La Merced park (west end of the Avenida Seguna) and walk along the Avenida a few blocks east to the Ministerio de Hacienda (in front of the Teatro Nacional), where they will voice their protests to the public servants inside.