The Beguiling Bronzes of 4th Avenue 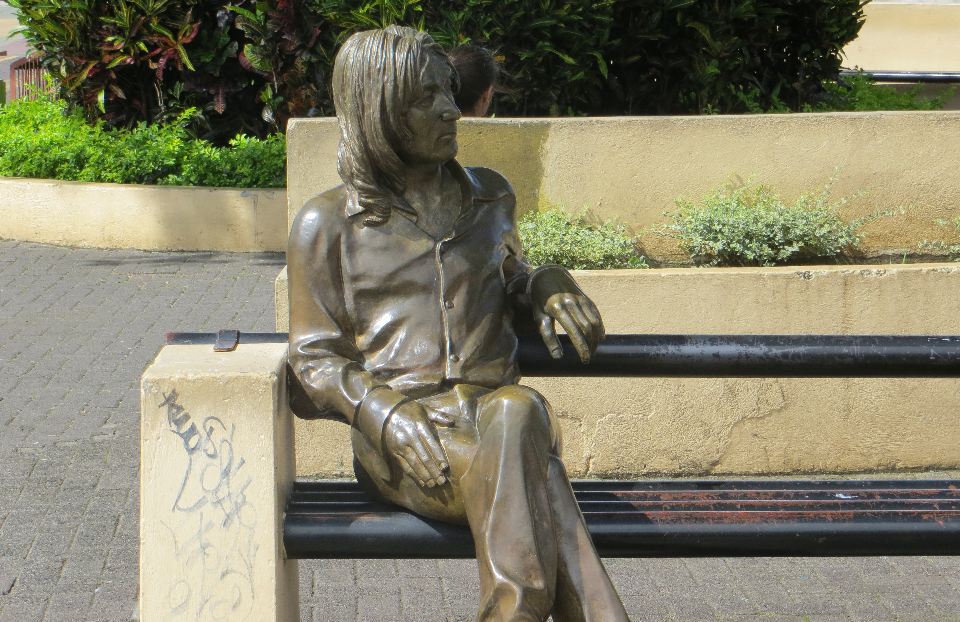 QCOSTARICA – Avenida Cuatro (4th Avenue) in Downtown San José is known as “The Other Pedestrian Walkway.” When compared to the more famous Avenida Central, which boasts the National Theater, the museums and many upscale shops, 4th Avenue comes off looking like the weak sister.

But what you will on find on 4th Avenue are some fascinating statues. These pieces of public art make a walk down the Avenue well worth your time, and they are some of the wonderful surprises of Downtown San José.

Here are three of them:

At the western edge of the 4th Avenue Walkway is a beautiful church, called La Iglesia de Nuestra Señora de Merced. In a garden next to the church is a particularly eye-catching statue of Jesus. It shows Jesus standing with his arms outstretched facing the on-coming automobile traffic of the very busy intersection of Paseo Colon and Avenida 2. He appears to be blessing the travelers. The statue is called Cristo del Camino (Christ of the Highway).

At the opposite end of the 4th Avenue Walkway you will see another church. This one is called Iglesia la Soledad. Here you will find a small open plaza in front of the church with several park benches. Look at the benches. You will find a statue of a man sitting on one of the benches. The man is John Lennon. Beside him is a small brass plaque that contains a line in Spanish from the song “Imagine.”

Another way to find the John Lennon statue is to walk under the Chinese Arch on Avenida 2. The statue is one block south of the Arch. This has become a very popular spot, since you can sit next to the famous Beatle and get your picture taken.

By far, the most poignant of the statues on 4th Avenue can be found next to the Cathedral Metropolitana. On the south side of the Cathedral, just outside the wrought iron fencing, there is a small inconspicuous statue of a young girl standing on a waist-high pedestal. Tens of thousands of people walk by it every day without ever noticing it. Or if they do notice it, most have no idea what it is.

The girl on the pedestal is looking heavenward, and if you look closely, you will see that her hands are bound. The girl is Anne Frank, the 15 year old Jewish girl who was led away by the Germans to a concentration camp. She later died in the Nazi death camps.

The statue was a gift from the people of Holland, a country that suffered greatly in World War II, to the peace-loving people of Costa Rica. It was presented by the Dutch embassy in 2008 to serve as a painful reminder of the horrors of Nazism. There was originally a plaque on the pedestal, but it has since disappeared.

Downtown San José is full of wonderful little gems. These are just three of them. They are all part of The Real San Jose.

Michael Miller is the author of The Real San José, the first and only guide book that focuses on Downtown San Jose. He is retired and currently living in San Jose. You can find The Real San José by clicking here: http://www.amazon.com/Real-San-Jose-Michael-Downtown-ebook/dp/B00OT67OU0/ref=sr_1_1?s=books&ie=UTF8&qid=1414423398&sr=1-1&keywords=the+real+san+jose