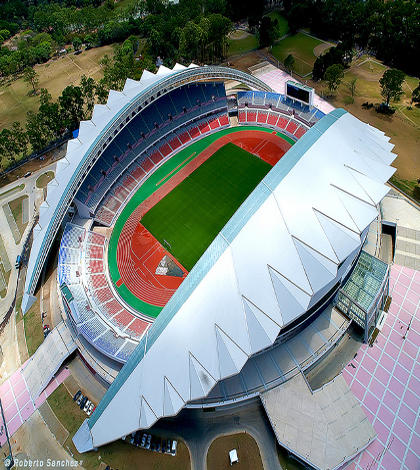 Artists like Maná and Alejandro Sanz are two major artists coming to Costa Rica in the coming weeks. But neither will see the inside of the Estadio Nacional (National Stadium), the structure that has become the “proud white elephant” sitting at the northwest corner of the La Sabana park.

Last month, the Ministerio de Salud by way of a health order limited presentations at the stadium, in effect shutting off the lights at the stadium for night concerts, for sound levels cannot exceed 45 decibels after 8:00 pm.

The ban was imposed after the Sala Constitucional (Constitutional Court) ruled in favour of an appeal by a neighbour complaining of the noise and requesting the Ministry of Health to control sound levels during events.

The appeal was filed with the Lady Gaga concert on November 3, 2012. The order by Court was handed down in mid January.

What this meant was that promoters have had to look elsewhere.

Edgar Barrantes, general manager at the stadium, said that stadium faces to lose some US$750.000 in revenue this year. According to Barrantes, it is revenue needed to maintain the stadium, as the cost of maintenance and operations is about US$120.000 per month.

“It is not enought with just soccer games”, explains Barrantes.

The ban also affects Costa Ricans from attending class events. Moreover, promoters who were shy at first to stage their presentations at the stadium, began to warm up to the idea and in the past year were using the stadium in La Sabana for major concerts.

But, now it is back to the likes of the Ricardo Saprissa and Alejandro Mora stadiums, stadiums that are great for soccer games, but less than ideal for concerts.

In the past, the Saprissa and Mora was all that was available for major concerts. Promoters had to work around the limitations, bands had to work with that they had and the fans, well “this is Costa Rica”.

The development of the national stadium changed all that.

Guillermo Flores Galindo, the regional director for the Ministry of Health, defended the Health ban in saying that they have to place the well being of the public first and what the stadium managers have to do is mitigate the situation.

However, Flores is realistic. He told La Nacion in a recent interview that the measures presented so far by stadium officials “do not meet expectations” and that in no way does he see the stadium solving the situation.

One of the alternatives the stadium is looking at is adding a clause to the promoter contract, placing the burden of noise level and controls on them. Another alternative is to not allow concerts that go past 10:00 pm and/or change the location of the stage to direct the sound away from the residential homes (to the west and north) and onto the direction of the soccer fields (to the east).

Barrantes added that he also intends to discuss the situation with the complaining neighbours and come to some sort of agreement.

For the first half of this year there had been five major concerts planned to take place in the stadium. To date, all have moved to other locations.

The only events occurring at the stadium are day events like soccer games that are far and few in between, religious activities and the ucomping inauguration event of the 2013 Central American games, the largest multi-sport event organized in Costa Rica, opening in San José on March 3.

The Estadio Nacional was built by the government of China and donated to the people of Costa Rica. The stadium was built on the same spot where the old national stadium had stood for decades and a few blocks away from the home of the man responsible for brokering the deal, Oscar Arias Sanchez and the Chinese embassy across the street from don Oscar.

The area around the stadium has also changed in the two years the stadium has been standing: across the street is now a McDonalds, many old homes and businesses have been torn down and the land cleared for parking, which can go as much as ¢10.000 colones (US$20) for an event.

The area around the stadium has also seen the  mushroom of high rise condos. Within two blocks in the north, west and south of the stadium (the east is the soccer fields of the La Sabana park), there are at least six high rise condos built or near completion.