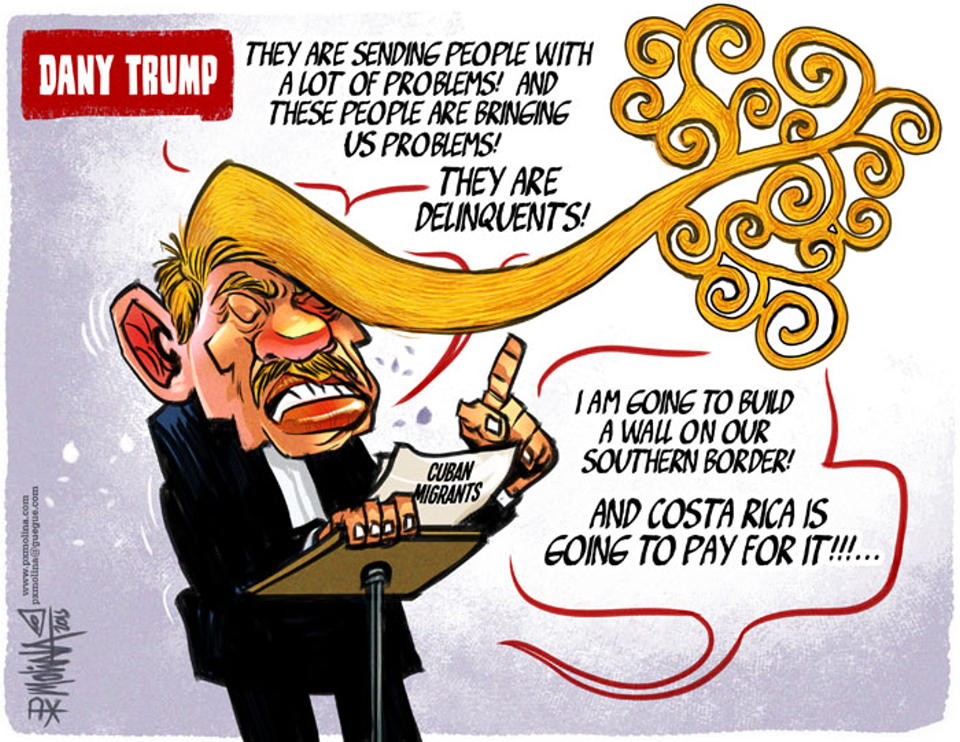 This article published in January 2016 on Confidencial.com. ni was translated from Spanish by Havana Times.

The arrival of the first Cuban migrants in the United States, although only a small fraction of the more than 6,000 Cubans still stranded in Costa Rica, symbolizes the collapse of that hateful wall raised by Nicaraguan president Daniel Ortega to block their passage through Central America.

The wall was erected via the deployment of troops, police and tear gas, alleging “national security” as a reason to deny the migrants temporary transit visas. Ortega’s reasoning failed to convince anyone in Nicaragua or any of the countries belonging to the Central America Integration System (SICA).

The wall has been torn down thanks to a diplomatic initiative involving the decisive participation of Mexico, which facilitated an accord between Costa Rica and the Central American countries to the north – El Salvador, Guatemala, Honduras and Belize. The agreement prevailed with the support of the International Organization for Migration (OIM), the consent of the United States, and in the absence of any objection from Cuba. In this way a secure route was found for resolving an exceptional migrant problem whose solution was well within the possibilities of the Central American Integration System had it not been thwarted by Comandante Ortega’s arrogance.

Clearly, the underlying issue won’t be resolved until the United States Congress repeals the Cuban Adjustment Act with its “wet foot-dry foot” policy that confers on the Cubans a distinctively different treatment, one unique in the world in terms of immigration policies. It’s a law as archaic as the U.S. trade embargo in this era of normalizing diplomatic relations with Cuba, and sooner or later its time will come.

But it’s one thing to demand the repeal of this law and something very different to orchestrate the kind of blackmail that Ortega imposed on the SICA by closing our southern border and thus holding the Cuban migrants hostage in Costa Rica.

In the end, the Cubans flew from Liberia, a city in northern Costa Rica, to El Salvador, and after crossing three other countries arrived at the United States border. Ortega’s wall drove up the cost of their trip, but costed the Nicaraguan government even more when the Comandante was left “hanging by the seat of his pants” with his policy completely isolated in a region that has been trying to take the lead against the United States on matters of immigration. In addition, Ortega’s disguise of “Christianity and solidarity” slipped off, revealing to his neighbors and international public opinion the demagoguery that masks the authoritarian regime that we endure in Nicaragua.

At the root of this apparently irrational behavior in Nicaragua lies a structural cause. Under Ortega, a State foreign policy based on national interests came to an end. It was substituted by a conspiratorial strategy based exclusively on the alignment of friends and enemies around the interests of the Comandante.

This conspiracy is directed by a closed family circle, and marked by a lack of transparency and public debate. That’s how the concession for a canal was negotiated with the Chinese mogul Wang Jing to the detriment of the national interest, and why a solitary Nicaragua, motivated by the alliance between Ortega and Putin, supported Abkhazia and South Ossetia’s independence from Georgia.

And since we’re also clients and partners of Chavez’ Venezuela, Nicaragua denounces at international forums the “economic warfare” and the “international plot” to overturn Maduro, while Ortega profits from the private business deals made possible by diverting millions in international cooperation from the Venezuelan state.

On the topic of the Cuban migrants, Ortega has been moved by his ideological alignment with Cuba to attack the United States. The paradox is that while the one-party Cuban regime is at the center of his personal political ideals, he can’t be guided by the island’s economic model; not only because of its palpable failures, but also because the Comandante, when all is said and done, is a pragmatic Stalinist who himself holds a large amount of private capital in the country as well as being in partnership with many large business owners.

In addition to the alignment with Cuba, the blockade of the Cuban migrants has been influenced by Ortega’s political blindness: he views the democratic government of Costa Rica as part of an enemy band that conspires against him. This perception has its roots in the cold war of the 80s, and with help from the necessary counterpart of Costa Rican collaborators has kept both countries from sustaining a political dialogue for the past nine years.

Given that Nicaragua is a country of emigrants – over 20% of our population live in the United States, Costa Rica and other countries – the absence of a permanent dialogue with Costa Rica is unforgivable; it represents a mockery of the interests and the rights of our fellow citizens that work either seasonally or permanently in that country.

For reasons of law, but also for ethical and human rights considerations, Nicaragua’s State policies should support the legal and safe migration of our citizens to Costa Rica. Nevertheless, Ortega has never designed such policies to support our emigrants, and he was even less prepared to accept that the demand of the Cuban migrants to make their crossing through Nicaragua wasn’t a foreign conspiracy but a legitimate matter of migratory human rights.

We are now witnessing the third consecutive failure in the last two months of Ortega’s foreign policies. The first was during the COP21 forum on climate change in Paris, where his government was one of only a few in the world – forming a select club with North Korea – that opposed the global accord, refusing to present a proposal for reducing greenhouse gas emissions. Several days later in the Hague, the International Court of Justice emitted a verdict that condemned Nicaragua for violating the sovereignty of Costa Rican territory and also obligated them to negotiate a compensation agreement. The third, obviously, is the fiasco of the Cuban migrants.

Common sense suggests that we should wait for a rectification, but that won’t happen until a democratic political change is produced in Nicaragua. Hence, we can expect worse times ahead with the same pompous rhetoric of Ortega, unleashing “battles” against his enemies. As a consolation, we are left with the fact that in the area of migrant rights Ortega’s demagoguery has reached an end.

Pedro X. Molina, Confidential’s cartoonist, immortalized the Comandante in a sketch entitled “Dany –Trump”, a fusion of both personalities in which Trump’s inimitable blond crest of hair is reborn upon Ortega’s baldness, like one of those yellow metal trees that the First Lady installed in Managua, presenting it as the new symbol of his regime. From now on, each time that Trump vociferates against the Latin American migrants that try to reach the United States, we’ll see the reflection of Ortega in the mirror of this grotesque personality, his Trumpian scorn for the Nicaraguan and Cuban migrants and the collapse of his wall in Central America.

Life comes at you fast when you’re a teen...
Trends