The Most Important Phrase to Know When Visiting Costa Rica

COSTA RICA TRAVEL  – First-time visitors to Costa Rica will notice a particular saying that flows from the lips of every local, one that seems to be very flexible in terms of its use and meaning. 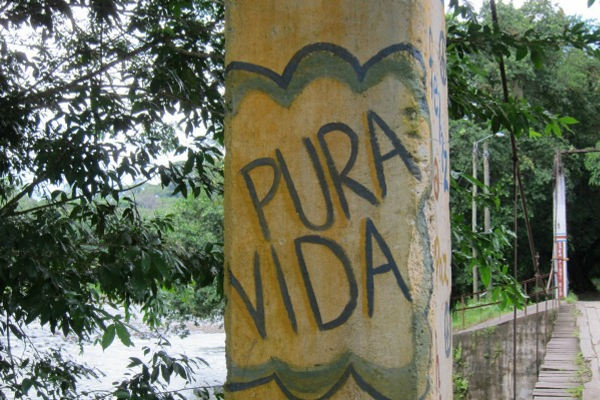 Pura Vida (pronounced POO-rah VEE-dah) literally means “Pure Life,” but the meaning of the phrase goes well beyond its simply translation. In fact, it has many loose translations to go along with its direct one. Practically, it is used as a salutation, farewell, thank you, descriptor, and state of being. More contextually, it represents the idea of living a peaceful, uncluttered existence amongst nature, family, and friends, and that life, no matter how much or how little you have, is wonderful.

How this seemingly organic phrase came to be so widespread in the country is, ironically, courtesy of pop culture. In the mid-1950s, a Mexican film called Pura Vida featured a character who used the phrase over and over again as a way to express his optimism. Fans of the movie began to use it in their conversations at home, and eventually it fully caught on and was used throughout Costa Rica in the 1970s.

Can you believe that one of the most important expressions of the country’s way and lifestyle comes from a movie quote? It’s almost unbelievable, but it is indeed where scholars attribute the phrase. As tourism has grown, Pura Vida has doubled as a marketing platform. Many businesses have taken the name, and you’ll see it printed on just about every kind of souvenir.

Regardless of whether you buy a T-shirt, be sure to try out the phrase for yourself. It is totally acceptable for tourists to get in on the action while visiting, so don’t be shy about tossing it around and exploring its meaning. Locals are very proud of Pura Vida, and will be happy to hear a foreigner using it.

If you want to take it a step further, ask those you meet what Pura Vida means to them. You will get a wide range of answers that all have a common theme: An articulation of being happy with what you have – whether it’s a lot or a little – and a continued quest to find happiness in the blessings that surround each and every one of us.

QCOSTARICA - The prestige of the company of some of the richest men in Costa Rica hangs by a thread. For many, the MECO...
Travel