The current notes will continue in circulation until final withdrawal, a date for this is not yet defined.

(QCOSTARICA) The Banco Central de Costa Rica (Central Bank) will put into circulation a new denomination of banknotes similar to the material used in the ¢1.000 notes currently in circulation. 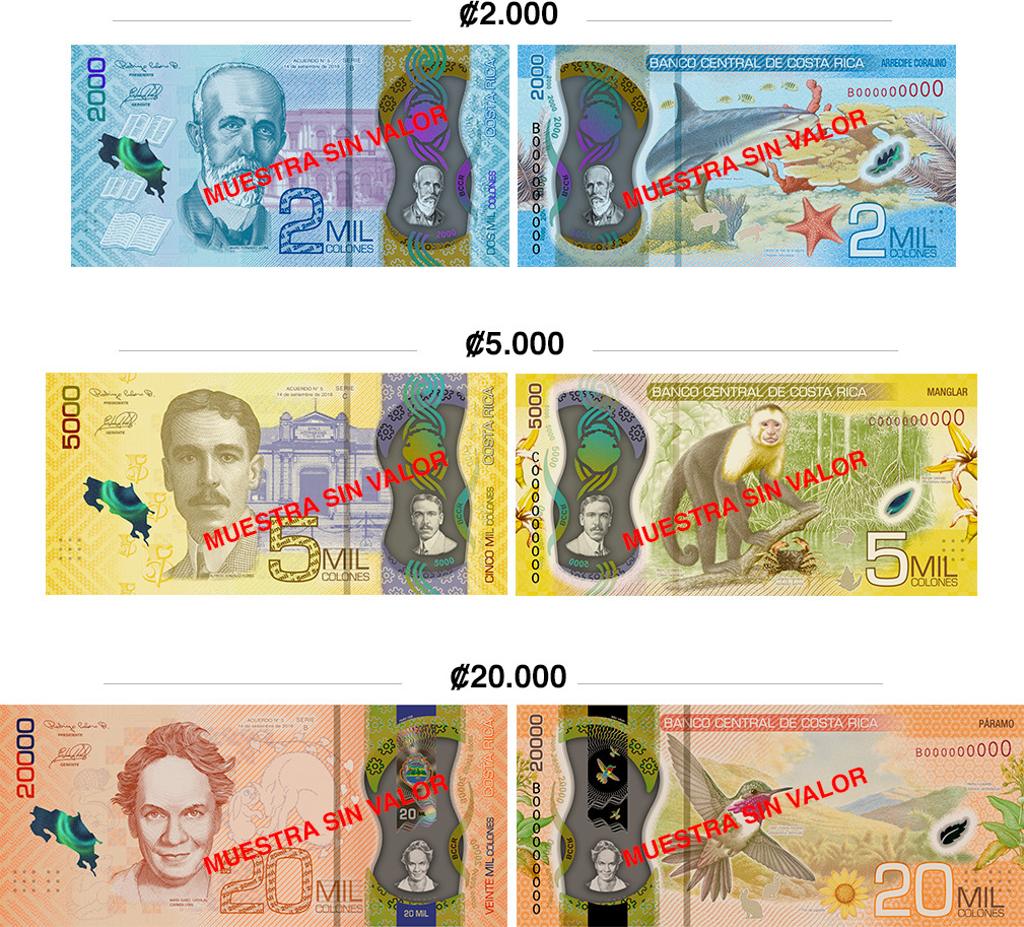 The new notes are made of a polymer substrate, a compound similar to plastic, but which makes it recyclable. This material makes the notes more resistant and durable and will allow the material to be reused when they reach their useful life.

The new banknotes will be similar in size, shape and color of the notes currently in circulation, just they will have a different feel. They are ¢20MIL, ¢10MIL, ¢5MIL, and ¢2MIL.

“Although the new banknotes have adjustments in their design and in their structure of security measures to verify their authenticity and combat counterfeiting, they maintain the same characters, motifs, shades and sizes as those currently in circulation,” said the Central Bank.

The new notes will be hitting the streets in “the coming months” according to the Central Bank.

“Once the financial entities conclude the calibration of the banknote processing equipment, ATMs and other devices, necessary tasks for such equipment to recognize the new banknotes, a stage already in process,” the Central Bank said in a statement.

The ¢50MIL is being taken out of circulation. The others will continue in circulation until final withdrawal, a date for this is not yet defined.

QCOSTARICA - The La Niña climate phenomenon has developed and is expected to last into next year, affecting temperatures, precipitation and storm patterns in...
Read more
Nicaragua

TODAY NICARAGUA – The 70 votes of the ruling Frente Sandinista (Sandinista Front) in the National Assembly approved, without opposition, the Special Law on...
Health

QCOSTARICA - The General Director of Health, Priscilla Herrera, confirmed 1,296 new cases of COVID-19 for Friday, October 30, of which 275 are by...
HQ

QCOSTARICA - A Costa Rican man took his Facebook block to the Constiutional Court or Sala VI, claiming that the social network had prohibited...
Pura Vida

Costa Rica's golden fruit has gone pink. Yes, you're reading that right. Through bioengineering the interior of Delmonte's pineapple from Costa Rica is pink. The...
Politics

QCOSTARICA - President Carlos Alvarado, signed on Friday the law reducing the vehicle property tax on the 2021 Marchamo, awith which he authorizes a...