Costa Rica has a new traffic law that aims to correct the problems of the 2008 law and aims to reduce carnage on the country’s roads, there are a couple of points that are EXTREMELY important to foreigners living and/or visiting Costa Rica. 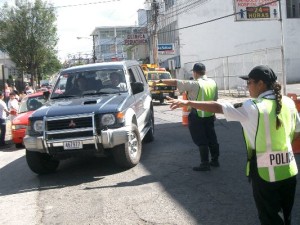 Foreigners living (called expats)  and visitors alike can drive in Costa Rica for the duration of their “legal” stay with a license issued by their home country.

North Americans (residents of the US and Canada, not including Mexico), Europeans and many other countries have a legal stay (visitor) of up to three months, all other countries, 30 days.

In the old days it was recommended that a foreigners overstaying his or her visitors status obtain a Costa Rican driver’s license, which simply meant going to the driver’s license office, filling out the forms, passing the required medical exam and paying the fees.

Many foreigners – other than short term visitors – couldn’t be bothered with the process. In effect it was never a problem. Until now.

QCOSTARICA - The quijongo is now in very good health thanks to the care of the people of Guanacaste, who are dedicated to protecting...
Front Page

QCOSTARICA - Within a few months, the Juan Santamaría International Airport or San Jose airport (SJO), went from being “bustling” to becoming a practically...
Employment

UPDATED: The DGME confirmed that anyone entering the country on or after December 17, 2019, will be allowed to legally stay until June 1st,...
National

QCOSTARICA - For their preparedness to face tsunamis, the communities of Tamarindo and Sámara were recognized by the Junta Nacional Tsunami Ready de Costa...
Guatemala

Q24N - Guatemala on Tuesday received 200,000 doses of the vaccine against covid-19 donated by India, which it will use to complete the immunization...
Health

QCOSTARICA - A total of 24 travelers, so far, face problems with the law when discovered trying to leave Costa Rica, through the San...
Front Page

QCOSTARICA - The so-called Costa Rican space agency, recently approved by Congress, does not have to be a bureaucratic giant, with a large office...
El Salvador

Q24N - Nayib Bukele entered the legislative palace surrounded by military personnel carrying long weapons. He walked in front of the benches before the...