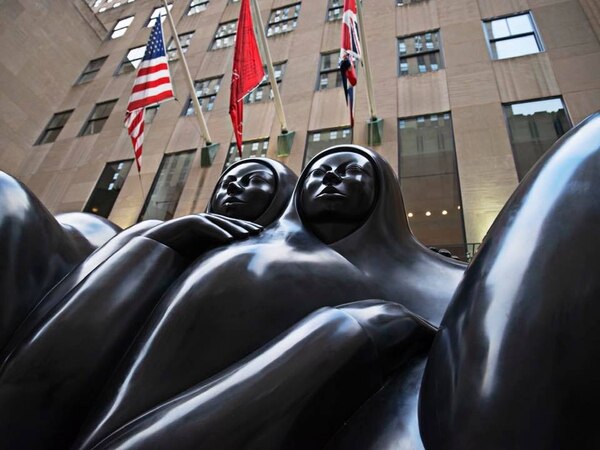 Thursday morning, the Rockefeller Center in New York, woke up with a particular Costa Rican presence: A bronze couple, leaning on their backs.

This is the monumental work “Pareja” by Jiménez Deredia created in 2014. In October last year, the sculpture was exhibited in Pisa and, a few weeks before, in Luca, Italy.

This work, according to the creator himself, “is a tribute to women. My sculptures are inspired by life. My work is inspired by women, who generate life,” the artist told La Nacion’s Viva in a previous interview.

“What a joy to see one of my monumental sculptures at the Rochefeller Center in New York for the Christie’s auction,” the noted Costa Rican sculptor wrote on his Facebook page.

Jiménez Deredia said that, for that sale, he had no intervention. “That’s the secondary market, a gallery or dealer took it to Christie’s. Although I was not the one who sold it, it does mark a milestone in auctions and, in addition, it was shown to millions,” said the sculptor.

On that occasion, Pareja was exposed in the Hotel Costa Rica square.

CBD took the cannabis market by storm. Now, it...
Guatemala