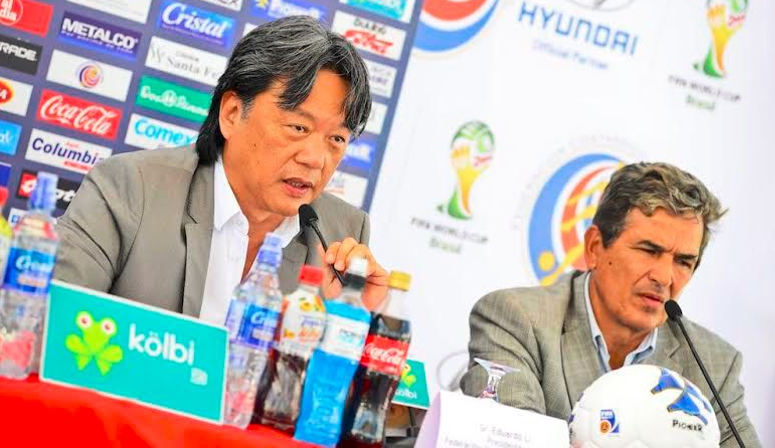 Following the bad break up between the Pinto and Fedefútbol we continue to get bit and pieces of anomalies surrounding the way Pinto treated his players and his relationship with Li.

Based on the revelations made by the director of Blu Radio, Javier Hernández, it appears that the Fedefútbol had made the decision to replace Pinto before La Sele rolling into Brazi and Li was shopping around for a new head coach.

La Sele in World Cup 2014 went undefeated fives games straight and reach the quarter finals, a height no other Costa Rican national teams had done before.

Hernández said that Li sought out Juan Carlos Osorio and while having coffee with Osorio he noticed text message from Li, inviting  the Colombian coach to work with La Sele.

Lest we not forget that Pinto is also Colombian and the “dirty laundry” being aired in Costa Rica is being played out in Colombia as well.

Osorio, nicknamed El Recreacionista (The Recreationist) is a former Colombian football player and currently coach of Atlético Nacional in Colombia. His experience includes being part of the head coaches for the Chicago Fire (2007) and managers for the Metrostars/New York Red Bulls (2008-2009)

“During our coffee Osorio received message saying: “Think about it, what we want is a new coach” and that’s when I started to think, but if Pinto is doing them a historic campaign,” said Hernández.

Hernández added that the gossip was that they would have a “cajón” (big box) ready for Pinto on his return from the World Cup, regardless of the results.

The radio station director commented that he sees it unlikely that Osorio would be interested in working with Costa Rica on their way to Russia in 2018.

TODAY NICARAGUA – The vice president of Nicaragua and First Lady, Rosario Murillo, assured that those who feel persecuted are for the crimes they...
Expat Focus

By Amy Gdala, Guest Contributor - The US has a surplus of vaccines, while Costa Rica is struggling to supply sufficient numbers to citizens...
El Salvador