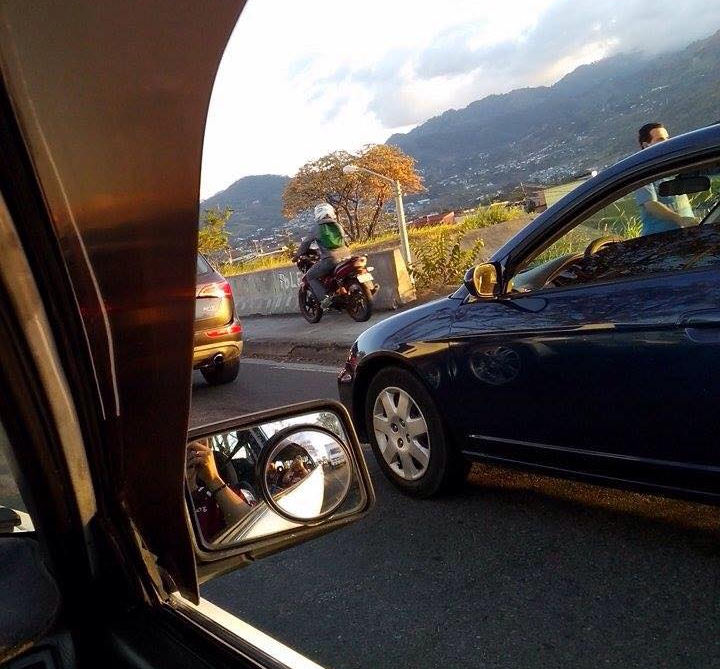 TICO BULL – This photo comes from our friends at El Infierno en Costa Rica, showing the lack of respect by motorcyclists of not only our roads, but the sidewalks as well.

In the submitted photo, taken in the Hatillos (southwest side of San José), the lack of culture (‘incultura’ in Spanish).

The real sad part is the lack of sufficient traffic officials (tránsitos) to put order the endemic road chaos that is lived daily.

If everyone plays their part we wouldn’t have such a traffic mess – I said such as, since the other part is the lack of infrastructure that a decade ago was adequate, today totally not.

The above photo I took the other on the autopista General Cañas at 2 in the afternoon. It took almost 15 minutes to travel the less than 2 kilometres from Virilla (Platina) bridge to Plaza Real Cariari, and then only 5 minutes to the international airport (lucky there).

Yesterday, on the Ruta 27, at 5:30pm, traffic in the San José direction backed up before the toll stations in Escazú, and continues all the way to the Circunvalacíon and to La Sabana, I imagine.

I was then totally shocked that the Circunvalacíon from the 27 north to Pavas as completely clear – no traffic at all!

But, my heart went out to drivers coming from the La Uruca to Escazú, completely backed up, continuing past the toll booths to Guachipelin. Bumper to bumper like I have never seen before.

Coming from Santa Ana, I saw the traffic but nothing causing it. Just sheer volume.

QCOSTARICA - Electronic payment in toll stations located in...
Lighter Side