Rico’s TICO BULL – The lack of respect and high speed results every day on our roads deaths and injuries. I won’t even mention the high cost of damage to the vehicles involved and all of us who caught in the traffic nightmare that ensues.

An example is the crash – I cannot call it an accident – this morning on the Ruta 27, past the ‘pejaje’ toll station. From the photos, the driver on the motorcycle had to be moving at a pretty high speed to cause such a dent in the vehicle. The motorcyclist mostly didn’t make it.

Blame it on the motorcyclist or the driver of the car who may have braked, if there were respect and no speeding involved, I am sure this crash would have been one of only material damage.

Weeks ago, a good personal friend, also on a motorcycle, was involved in a crash. Also on the #27, up the hill from Santa Ana to Guachipelin.

I happened to have been driving at that exact spot a few minutes after the crash. As I looked on the person laid out on the asphalt, face down, facing away from me, I thought “another f***ing motorcyclist killed himself”.

I knew he ha not died for when driving in the opposite direction some 45 minutes later all that remained on the road was the motorcycle and a tow truck attempting to remove it. Had there been a fatality, the scene would be tied up for hours, like the scene a year or so back, on the Costanera, where two motorcyclists collided with a small pick up, the mangled bodies strewn on the pavement waiting on judicial authorities to give the word on removing the bodies.

The crash occurred at a point of no alternate, forcing all three lanes of the Costanera blocked for more than 3 hours. My friend (driving) and I were some 500 meters from the accident scene, when I walked up to the police tape, the bodies had been covered.

Back to my friend, he is recovering from his surgery to his hip. He survived what could have been a lot worse for him, but his life has changed. He admitted he was speeding when the car ahead of him braked. They did not connect, but due to the speed, he lost control of his bike. He swears he will not speed anymore. I wish I could believe him, that is if he ever recovers enough to get on a bike. Unlikely after seeing the x-rays. Not a doctor, don’t need to be to see all the metal he now has in his hip.

This past weekend, Friday and Saturday, I made several trips between San Jose and Caldera. On the Ruta 27, on both nights, there was rain, from downpour to drizzle and heavy fog in several places. Also, there were several accidents, mostly what appeared head-on collisions, in one case involving a semi.

Sunday morning, a young man behind the wheel on the Circunvalacion was going so fast he lost control of his vehicle, flew in the air, landing at the foot of the presidents, some 4 meters in high, in the monument known as ‘garantia sociales’.

Authorities putting together the scene noticed there were skid marks, the driver had not applied the brakes. And to fly into the air at such a height was going well over 100 miles per hour (160 km/h). Incredible, but true. See the video and photos for yourself. 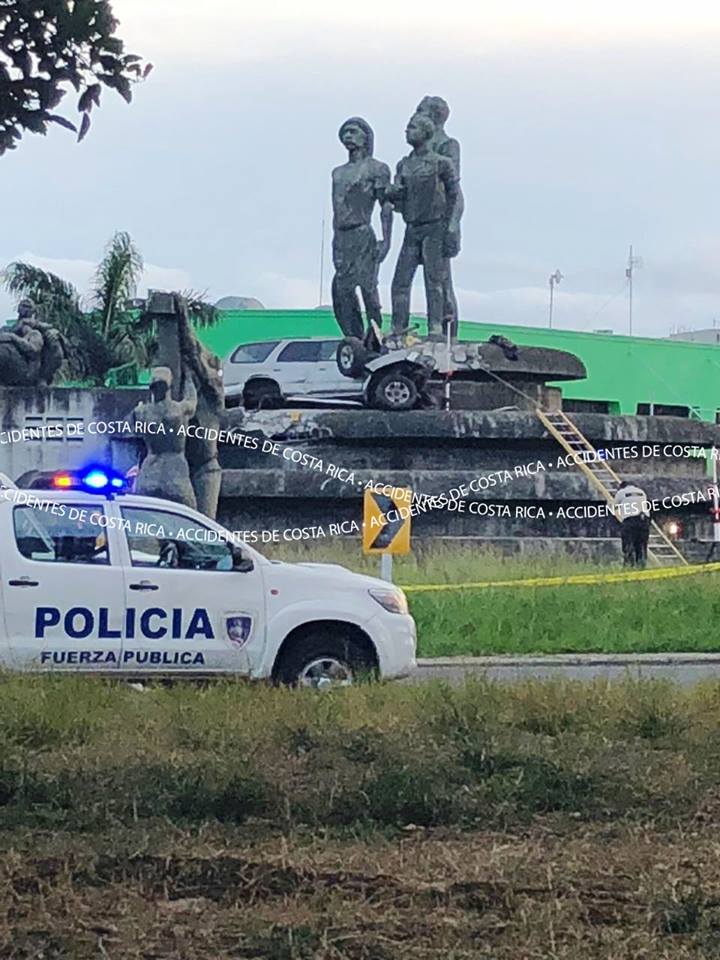 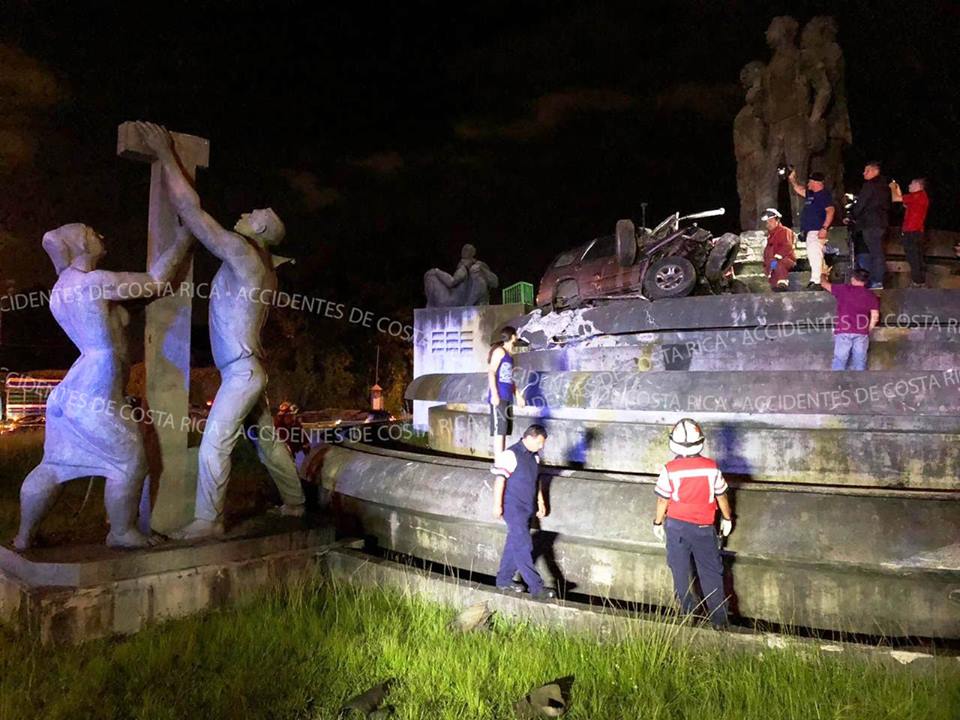 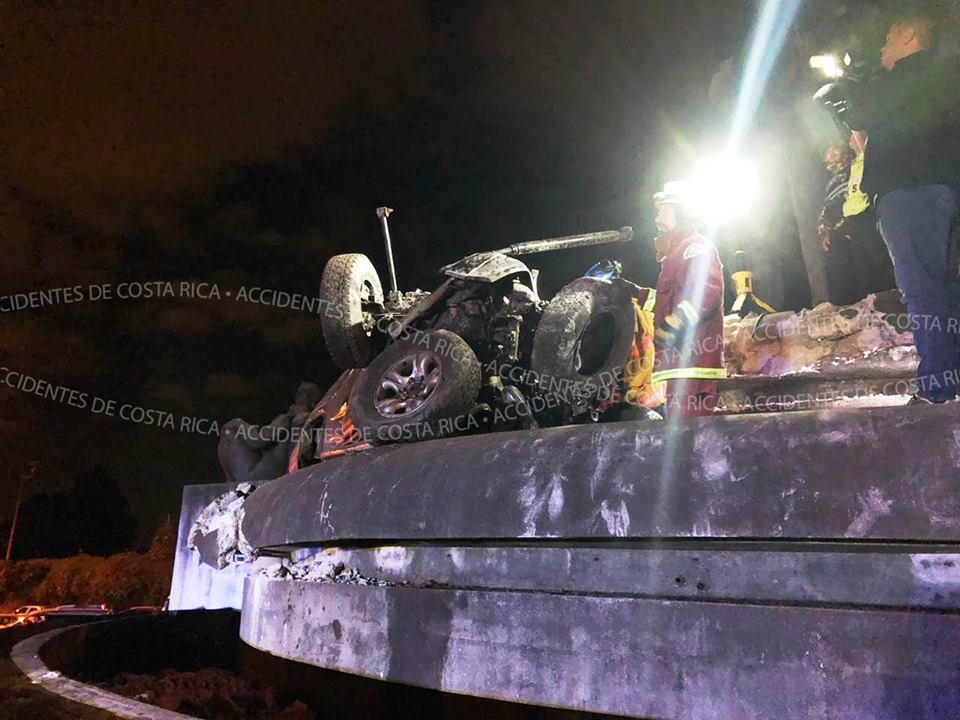 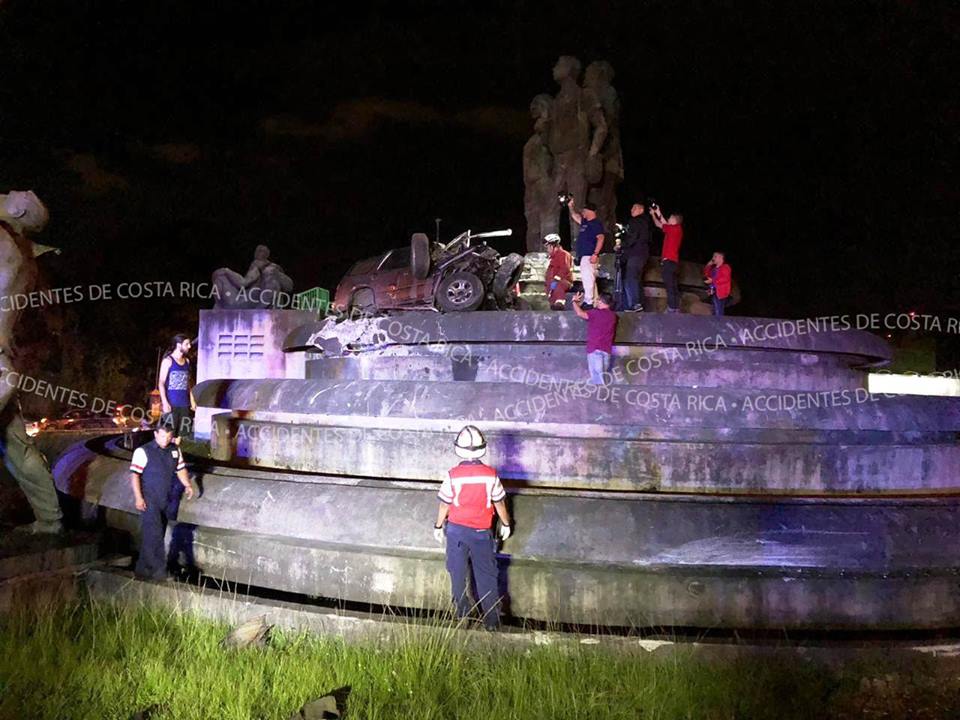 In my opinion, all could have been avoided if these, let’s call them drivers, respected the other drivers, the road conditions, themselves and had slowed down. But no.

The sad part if that this carnage will continue. Will continue until, well I don’t know.  What I do know is that I have to up my game of defensive driving.

Want to see more of what goes on daily – like in every f***g day in ‘Pura Vida’, check out the Facebook page “Accidentes de Costa Rica“. Warning, some of the photos are pretty hardcore.