QCOSTARICA – Three Costa Ricans are missing since April 11 in the Caribbean Sea while attempting to reach the United States illegally, looking for their “American Dream”.

The three are identified as Edith Alfaro Porras, 40; her husband, Rafael Arturo Garbanzo Cascante, 42; and a friend of the couple, Eliécer Ruiz Ureña, 46. All are residents of Perez Zeledon.

They, apparently, set sail from the Bahamas headed for Miami, on Saturday April 11, around 9:00pm. With them on their 300 kilometer trip was another Costa Rican, Luis Guillermo Sanchez and a local Bahamian boatman whose identity was not made available to the press.

According to the family, Luis Guillermo told them at some point their boat starting taking on water, and used plastic containers “pichingas” to help them stay afloat, but then lost sight of the three.

The ministry of Foreign Affairs (Ministerio de Relaciones Exteriores y Culto) confirmed the rescue of the boatman and Luis Guillermo, who was deported to Costa Rica by Bahamian authorities.

Robert Jagger, Costa Rican’s honorary consul in Nassau, Bahamas, says the search for three missing is continuing, including checking hospitals and prisons and says he has contacted the families.

According to the immigration service (Dirección de Migración), the couple left Costa Rica from the San Jose airport on March 26.

Maria Celeste Garbanzo, sister of Rafael Arturo, said her brother and his wife headed for Panama and on the same day took a flight to the Bahamas.

“Here in Costa Rica, the “coyotes” (human traffickers) paint a different picture from what it really can be. They say its super easy, takes minutes (to cross), either by way of Mexico or the Bahamas. But when they got there, it was completely different,” Maria Celeste told La Nacion. 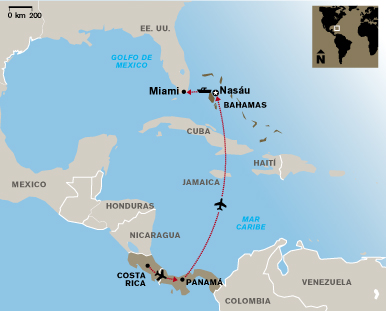 “There, in desparation they accept anything. They never told me how much money they paid, they did not give me any details, just that it was super easy, but it wasn’t so. It’s tragic (…), said Maria Celeste.

Frustrated Dream
The couple, Edith and Rafael Arturo, had travelled to the U.S. between 2000 and 2005; he worked in construction, she cleaning homes. During that time they had twins, born in Lancaster, Pennsylvania. The girls today are 11 (on March 23) and live in the U.S. with an aunt.

In 2005, Garbanzo was deported from the United States. The family moved back to Costa Rica.

Arcelio Alfaro, Edith’s brother, said the trip was for them to settle back in the U.S. to live and work there. “They already knew there they could earn well and so wanted to go back to their life of before,” said Arcelio Alfaro.

As the daughters have dual nationality, they travelled to the U.S. without any problems.

Maria Celeste added that “we want this to serve as an example for people who want to live their dream … It is best to always do it right or not do it at all.”

Q24N - Conditions are deteriorating in a camp on...
Nicaragua