In this country of peace, three persons on average died daily in 2013 in Costa Rica, but most of them on the streets and highways in accidents. Still, the 252 who died by stabbing or gunshots was bad news for a nation that prides itself on tranquility and reasonable interaction. 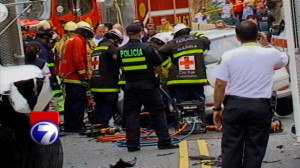 Traffic collisions accounted for 154 deaths, 61 in cars that turned over, 108 by being run over, 84 drowned, 27 in falls, 16 were poisoned, 49 were electrocuted or burned, and the rest of the violent deaths were unclassified.

Moreover, more than half the 1,493 injured were hurt in auto accidents (797). All told, the Red Cross told La Nacion that 982 died violently and 2,510 were injured. It appears that the mean streets of the country are mean because of, mostly, vehicles.

The Red Cross also reported that 135 were treated for injuries in the bull ring, baiting the fierce by often irritable herbivores. (In this country, the bulls generally get the best of these events because it is prohibited to kill or maim the animals. Fortunately, although most of the bull baiters go into the ring without even a cape, deaths of persons are rare. (Those who are injured may even learn that they should get a life.)

The Zapote festivities are closely watched by two Red Cross posts and by the Ministry of Heath, the latter closing one booth selling questionable food. Most of the medical emergencies (299) were minor and treated on site, but 33 were transferred to a medical center.

When one gathers thousands of persons in one place, there are bound to be some who have some medical problems.

QCOSTARICA - Thanks to the program Hacete Escuchar (“Make Yourself Heard”) developed by the U.S. Embassy San Jose’s Bureau of International Narcotics and Law...
Read more
Lighter Side

Government dialogue concludes with many intentions and few concrete proposals

QCOSTARICA - A woman, facing eight to sixteen in prison, accused of smuggling of migrants and trafficking in persons for the purpose of sexual...
Dollar Exchange

QCOSTARICA - The dollar exchange fell ¢10.38 this week as a result of the traditional sales of foreign currency made by companies to pay...
Health

QCOSTARICA - The pace with which COVID-19 vaccines are being developed worries some people, who fear they are not safe products. Both Leandra Abarca, coordinator...
Trends

Using edtech tools has almost become a necessity. Modern learning styles need the support of technology in order to deliver impactful learning to students. This...