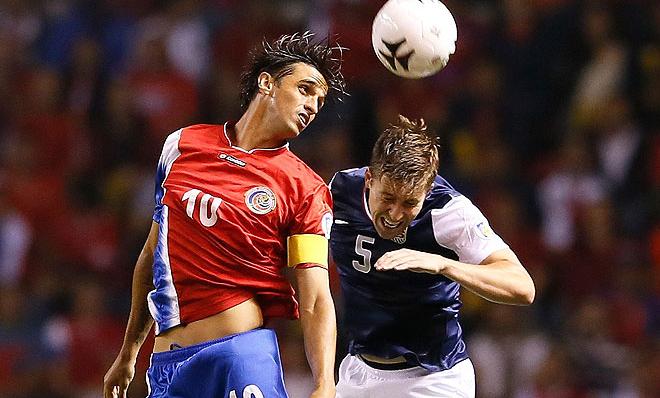 CNN – Three thoughts on the U.S.’s 3-1 loss against Costa Rica in a World Cup qualifier on Friday:

1. The U.S. missed its most indispensable player, Michael Bradley. Of all the bad things that could have happened in the pre-game warmup, losing Michael Bradley to a sprained left ankle was probably right near the top of the U.S.’s list. But that’s exactly what happened, and the Americans weren’t the same without their midfield general. Bradley’s last-second replacement, Geoff Cameron, did a decent enough job, but Bradley is by far the most confident U.S. central midfielder on the ball, and his ability to see the game and slow it down (if necessary) was dearly missed.

It didn’t help that Jermaine Jones was unable to pick up any slack in the midfield and committed a host of turnovers, some of them costly (including the one that led to Costa Rica’s third-minute goal). If Bradley is out for the Mexico game on Tuesday, the U.S.’s challenge will be made more difficult.

2. The U.S.’s second-half equalizer was there for the taking. Even without Bradley, the U.S. had the better of the play for much of the second half, and Clint Dempsey nearly added to his first-half penalty with a second goal when he hit the post with a curling shot in the 56th minute. But the Ticos’ Joel Campbell iced the game on a breakaway to put the hosts up 3-1 on a play where Matt Besler probably should have taken him out and picked up the yellow.

Besler did pick up a yellow a few minutes later and joined Cameron and Jozy Altidore as U.S. players who will be out with yellow-card suspensions on Tuesday against Mexico. Without Besler, Cameron, Altidore and perhaps an injured Bradley, the U.S. will have its newfound depth tested to the extreme in four days. (Altidore’s late yellow card was particularly unnecessary.)

3. CONCACAF got a lot crazier Friday night. Mexico had a far worse night than the U.S. did by losing 2-1 to Honduras, just the second time Mexico has ever lost a World Cup qualifier at home. With three games to go, the standings in the Hexagonal are now Costa Rica (14 points), the U.S. (13), Honduras (10), Mexico (8), Panama (7) and Jamaica (3).

In other words, the U.S.’s loss doesn’t mean the sky is falling, but there will be plenty of pressure to bag three points at home against Mexico on Tuesday — and perhaps clinch a berth in the 2014 World Cup. After yet another defeat in Costa Rica, the U.S. will be eager to get back to the friendly confines of Columbus.