The story of the legendary crocodile Pocho and his “owner,” Costa Rican fisherman Gilberto “Chito” Shedon, will be shown in Latin America on the nature TV channel NatGeo next Saturday a 7 p.m.. A filming team originally picked up on the story in 2009 that had captivated Costa Ricans. 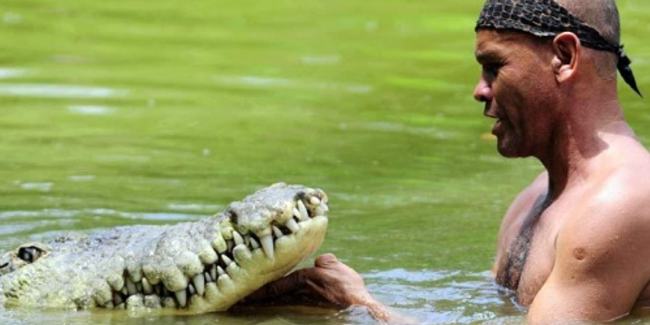 The team filmed the unlikely pair but decided that the 15 minute segment they had programed for the film was just too short to do the story justice, since the section showing Chito and Pocho swimming together in affectionate poses, especially with the Tico kissing Pocho’s nose, was too good on TV to cut so short.

So the NatGeo team came back for more. Nature lovers watching the show are bound to be pushovers for the story of a fisherman who rescued an injured crocodile in the Tarcoles River near his home. They became fast friends and Pocho seemed aware of his good fortune.

They performed before crowds on weekends until Pocho’s death of natural causes recently. The NatGeo Web site explains, “‘Tocando el dragon (touching the dragon in English) examines the surprising relation between the oldest predator on earth and a unique man, that defies the boundaries of the natural world.”

(We have not seen the film which aired in English a couple of weeks ago, but it should come with the caution, “Kids, don’t try this at home.”)

Chito actually trained Pocho to do tricks and for four years the pair were a favorite tourist attraction at the Centro de Tilapias at Siquierres. So beloved was Pocho that when he died of natural causes last Oct. 10 his body was carried in a funeral procession throughout the canton.

Chito told last Sunday’s edition of TV guide for this country (published by La Nacion) how NatGeo got wind of Pocho even though the croc was only a national celebrity at the time. “A filming team from NatGeo was filming a program in Africa when the team saw a tee shirt with my photo and Pocho’s on it.”

The tourist filled in the crew about Chito and Pocho and NatGeo was hooked. It took them three years of editing to get it just right and only this year did they send him a copy of the finished cut. And, like all who have lost a beloved pet, it was very hard, he said, the see Pocho swimming happily as if immortal.

In a manner of speaking, he is.

QCOSTARICA - Almost ¢140 billion colones (US$227 million dollars) is the amount the MECO construction company was able to snare for public works contracts...
Business