U.S. Couple stranded on sailboat in Nicaragua due to coronavirus lockdown

When Garrett and Audrey set out on this cruising season, theyhad the goal of transiting the Panama Canal by April 30, 2020. That isn’t going to happen anymore. 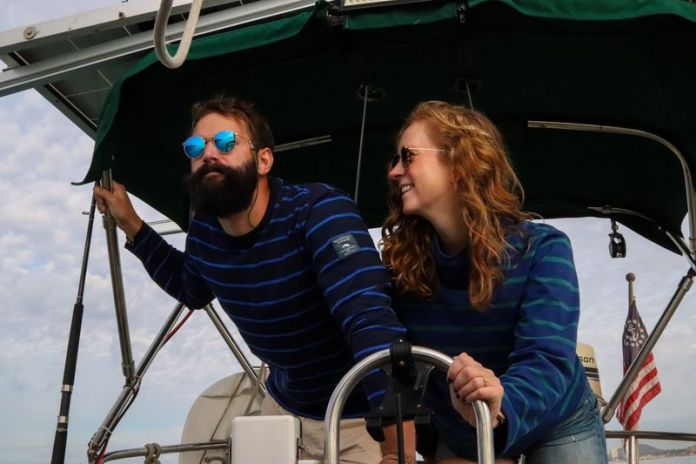 A Connecticut, U.S., native and her husband quit their jobs last year to sail around the world — now they’re stranded off the coast of Nicaragua amid a global pandemic, reaching out for help.

Audrey and Garrett Ruhland sailed south from Chiapas, Mexico, on March 11, hoping to meet up with friends in Costa Rica on March 26 and possibly store their boat there.

El Salvador and Panama had already closed their borders by that point. The couple sailed for 64 hours straight to Nicaragua, the only country that would take them, two days later.

On Tuesday, they learned the Avianca Airlines flight they planned to board as soon as Managua’s airport reopened on May 7 is no longer happening.

“My husband Garrett and I just received news from the U.S. Embassy in Nicaragua that all flights out of Managua have been postponed until at least June,” Audrey, 31, told the Daily News in an email sent from her 35-foot sailboat named Thisldu.

The new target date for reopening the airport is now June 4, she said.

“We are now vetting the option of sailing back to Chiapas, Mexico, but are unable to get the proper exit paperwork from Nicaragua because the offices are closed. This paperwork is required by the Mexican government,” she wrote.

In her desperation, she reached out to global shipping company UPS on Tuesday morning.

“They are still operating flights from Miami to Managua. I asked if it would be possible for my husband and I to get on one of those flights home,” she said.

“We are doing okay, just making it our priority to be able to return home,” she said.

The couple has been sheltering in place at Marina Puesta del Sol in Aserradores, Nicaragua, since March 13, as “coronavirus began spreading at a rapid rate and the world started changing around us,” she wrote in a blog post over the weekend.

“Guatemala, El Salvador and Honduras. Costa Rica and Panama. They’re all closed to us now,” she said. “There is no telling how long we will be stuck in Nicaragua.”

We learned yesterday that our May 7 flight from Managua to Miami was cancelled. The Nicaraguan airport is closed until June 4, though it’s possible that it will remain closed for longer. It is now likely that we will have to sail back to Mexico to be able to fly back to the States. But before we do that, I’m trying to get creative with alternative ways to get home. @upsairlines @ups is still flying from Miami to Managua, so I’ve been reaching out to them to see if we can get on one of those flights. We’ve been in contact with the U.S. Embassy, the State Department, and @rondesantisfl to see if there are any other flight options out there. We’re only a TWO HOUR flight from Miami. To me, in this moment, the prospect of a 3-day sail, leaving Thisldu on the hard in Mexico, and taking multiple flights home is harrowing, especially when we’re so close to Miami. But we’ll do what we have to do to get home. On top of yesterday’s scramble, our situation was also featured in the @nydailynews and @sfgate, which was both exciting and exhausting. It was A DAY. // . . #sailor #sailboat #sail #sailingstagram #sailinglife #instasail #homecoming #cruising #cruisinglife #liveaboard #ruhlandsailing #haveboatwilltravel #thisldu #vitaminsea #nautical #repatriation #american #atsea #nicaragua #centralamerica #nicaragua

In her email to The News, Audrey said she and Garrett, 32, are still pursuing the option of returning to Mexico, but flying out of Nicaragua would be safer.

“Sailing to Mexico right now is not ideal because we’re entering lightning season. Plus, the uncertainty that would lie ahead of us during that three-day sail would be harrowing. Still, it might be our best bet for getting home” to the U.S., she wrote.

She also pointed out a line in her weekend blog post explaining how the couple’s dire situation unfolded.

“If you’re wondering why it’s taken us this long to arrange travel out of Nicaragua, I want to remind you that our sailboat is our home. It holds everything that we own,” she wrote.

She said they’ve enjoyed their time in Nicaragua “immensely,” but they’re worried coronavirus is spreading in the country without adequate detection or social distancing measures.

And she’s worried about her husband.

“Garrett is prone to asthma,” she told The News. “We do not want to be taking up the country’s already limited resources.”

She said safety is the couple’s top priority, and they’re ready to return home.

“There’s still a lot of unknown ahead of us. Being in this position of uncertainty is hard. This week has been emotionally charged and, as a result, emotionally draining. We are, though, both on the same page and are trying our best to come home,” she wrote on her blog.