Upala And Liberia Mayors Criticize Lack Of Support By CNE

Q COSTA RICA NEWS 8:55pm Thursday. Both the mayors of Upala and Liberia, in the northern zone and Guancaste respectively, have critized the National Emergency Commission (CNE) for focusing their work on the landfall areas and not the tail end of Hurricane Otto. 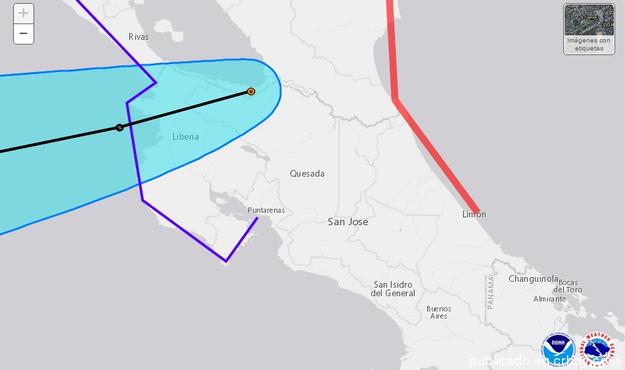 Upala’s mayor, Juan Bosco, during a live national television broadcast had strong words for the head of the CNE, Ivan Brenes, prompting the CNE head to respond publicly, who said on live television that help was on the way.

Bosco said his community lacked the support of the CNE, mainly not having any beds for the 500 and growing number of people already in shelters.

The mayor, in addition, pointed out that his city counted with only 15 buses to evacuate people and get them to safety.

Early indications did not include Upala in the path of Hurricane Otto. However, around 3:00pm Thursday the national weather service (IMN) updated its forecast that the eye of the hurricane would be over Upala by 6:00pm, a community of some 45,000.

By 8:30pm the capital city of the province of Guanacaste, Liberia, was being battered by heavy rains and strong winds, Although the eye of the hurricane would be passing some 50 kilometres north.

“They (the CNE) had not concerned themselves with the tail end of the hurricane,” said Julio Viales during a live broadcast by Telenoticias during pouring rain in Liberia.

During a televised conference around 4:00pm, President Luis Guillermo Solis got up, abruptly ending the session when reporters began hounding him over the comments made by the Upala mayor and several legislators. The President, for the first time since the emergency began, reportedly on the job at 4:30am Thursday, at the CNE headquarters in San Jose, appeared bothered by the criticism.

Otto, still classed as a category 1 hurricane, is currently heading towards La Cruz and expected to be in the Pacific around 1:00am.

Experts say the tail end of the hurricane should be out of Costa Rica territory by 4:00am and the rain and winds completely subsiding by 8:00am Friday.

- Advertisement -
Paying the bills
Previous articleWoman Tosses Baby Inside A Bag To Save It From The Flood
Next articleWhy Did Hurricane Otto Not Lose Strength Despite Landfall? Blame It On Lake Nicaragua