US Invasion to Panama Remembered 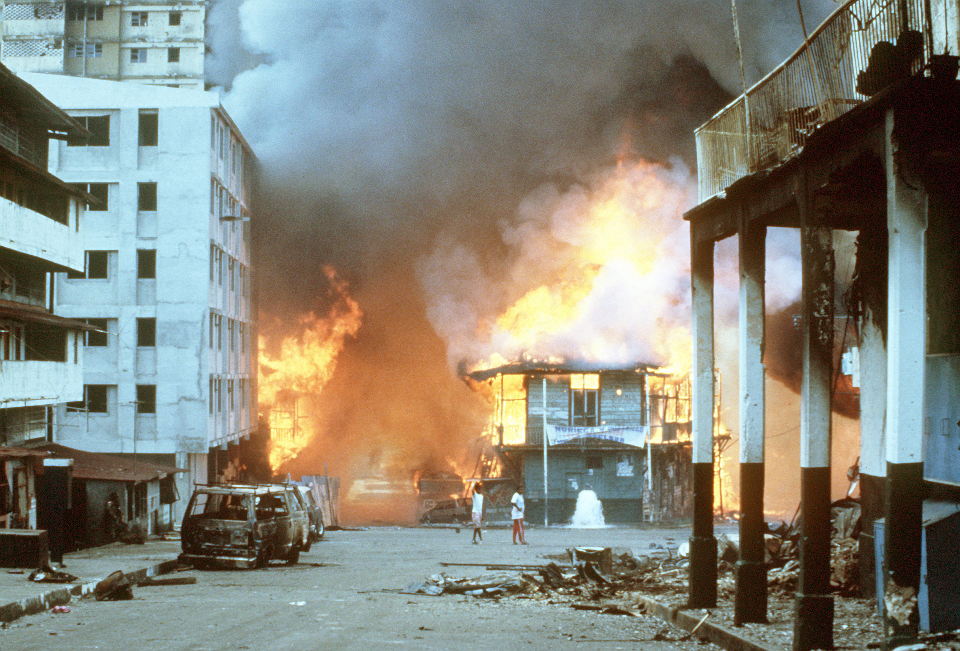 TODAY PANAMA (Prensa Latina) Hopes that the weeds that covers the historical memory of Panama could be cut and shine its truth, was renewed after a quarter century of misrepresentations in commemoration of the 25th anniversary of the military invasion US.

That statement is not based on the fact that this year has been more massive presence of the Panamanian people in acts by the ephemeris, both official and popular, including the Black March to the hero and martyr neighborhood of El Chorrillo but on the concepts that resurface with the force of time.

Families of the Fallen, the Committee for Barrio Martyr El Chorrillo, trade unionists, students, educators, human rights organizations and social organizations have called for the proclamation of December 20 as the Day of National Mourning and it seems that sooner rather than later they will achieve.

For now, we managed to take a big unprecedented step so far, and were President of the Republic, Juan Carlos Varela, almost all members of his government, and the Archbishop of Panama, José Domingo Ulloa, participate in the commemoration.

Not that the presence of both is valued only as a triumph and a recognition of the struggle and perseverance of the family to face oblivion that previous governments have sought to subdue the victims of the invasion, but the strong commitment expressed thoroughly investigate the real goals of the invasion.

Varela said it was time to heal that wound, a deadly pit hidden under tons of junk politics, but painfully open, which can be closed leaving only first discovered to get to the truth, and who only can find is the Panamanian people.

It is true that President Varela did not use the word in the act, but said the demands of family and victims of the invasion were feasible and would appoint a committee for study that leads the Vice President and Foreign Minister Isabel de Saint Malo.

There will officially begin, and that is something unheard also investigating how and why of that horrible and unpunished killing of the residents of a poor neighborhood as El Chorrillo and San Miguelito, not insulting and incredible argument that was to capture dictator Manuel Antonio Noriega for drug trafficking and money laundering.

As just said Noriega, whose historical responsibility is to have become a scapegoat to justify the slaughter, it was not an invasion, but an assault that was already invaded Panama to 14 US military bases.

So far the direct executors of the holocaust that may have claimed more than three thousand victims, although never know how many actually died, have no sense of their souls even the weight of criticism, and President George HW Bush, like his son, were allowed even repeat in Iraq so multiplied, mass murder in Panama.

Varela is the first president to officially honor the fallen in the invasion; marking the hope that this attempt of Ricardo Martinelli and his former Minister of Education Lucy Molinar to erase the historical memory by removing the material relations of the United States and Panama with curriculum changes remains buried and truth prevail.

Today, Tuesday, June 8, only ODDS can circulate. The measure is countrywide and applied between 5:00 am and 9:00 pm, save for those under the...
Coronavirus

Q TRAVEL - Travelers from the European Union or third countries, including Costa Rica, who have fully been vaccinated, will now be able to...
Environment