A United States Navy guided missile frigate involved in drug interdiction patrols off the Pacific Coast of Costa Rica is undergoing some operational difficulties. The USS Rentz (FFG-46) recently got underway from her home port at the San Diego Naval Base on a seven-month cruise in support of the multinational Operation Martillo, which is part of the protracted, U.S.-led War on Drugs. 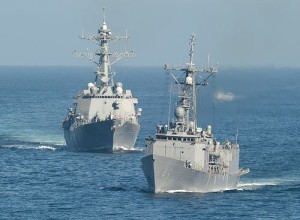 This past weekend, the USS Rentz was patrolling off the South Pacific coast of Costa Rica when she intercepted a fishing vessel near the Galapagos archipelago. The FV Capitan Erson, which bears Costa Rica registration PP-271, is a repeat offender with regard to drug smuggling. A U.S. Coast Guard boarding party assigned to the USS Rentz found nearly a ton of cocaine aboard the Erson.

According to an official press release from the Ministry of Public Safety (MSP in Spanish), 963 kilograms of cocaine hydrochloride powder were concealed in a fish hold below deck. The crew of the FV Capitan Erson was taken into custody by U.S. forces. Three of the four fishermen arrested are citizens of Costa Rica; one is from Nicaragua. All suspects are residents of Puntarenas.

A Couple of Snafus

A separate MSP press release indicates that the USS Rentz communicated her intention of delivering the suspects to law enforcement authorities and prosecutors in Costa Rica and then proceeded to take the fishing vessel in tow. Apparently, the towing operation was unsuccessful and the FV Capitan Erson sunk. The MSP press release did not specify whether the 963 kilos of flake were still aboard the fishing boat as she submerged.

Aside from losing the FV Capitan Erson, the USS Rentz ran into another snafu. She lacks legislative permit to dock in Costa Rica, and the four suspects are still aboard. As previously explained by the Costa Rica, foreign military vessels are required to be issued a legislative permit allowing them to dock or to disembark their crews. Earlier this year, the US Coast Guard Cutter Sherman planned to dock in Costa Rica, but her permit had expired and she was snubbed. A few weeks later, legislators at the National Assembly extended a few permits, but only for USCG vessels.

According to legislators who recently issued the permits, they don’t recall seeing a request for the USS Rentz. They do remember, however, her previous participation in the Joint Patrol Agreement -she even docked in Puntarenas back in 2011. The MSP assures that the permit for the USS Rentz was formally requested on June 10th, but legislators in Costa Rica are positive that the frigate was not part of the docket of requests.

The MSP is now rushing to get a permit for the USS Rentz. In the meantime, the four suspects are still aboard. Should the MSP be unsuccessful in obtaining the permit in a timely manner, the suspects might end up being prosecuted by the U.S.

Legislative permits for foreign military forces to enter Costa Rica have recently been hot-button political issues. A few weeks ago, the Constitutional Chamber found that the U.S. Blackhawk helicopters that formed part of the massive security operation prior to President Barack Obama’s historic visit were here illegally. When a C-17 Globemaster from the U.S. Air Force recently landed in Costa Rica to transport nearly 40 tons of cocaine to be destroyed in Miami, it also lacked legislative permit.

Article by: the Costa Rica Star

QCOSTARICA - Do you need a certificate of the COVID-19 vaccines applied in Costa Rica?  People who require a certificate that certifies the receipt...
Guatemala

Q24N - Arriving in the Guatemalan capital about two hours late, after the plane in which she was traveling had to turn around due...
Entertainment