VENEZUELA: How They See Us Abroad

TODAY VENEZUELA – The government of Nicolás Maduro is under observation. His infant tenure as president has been the focus of debate in various international scenarios from Europe to Latin America. By Oscar Medina 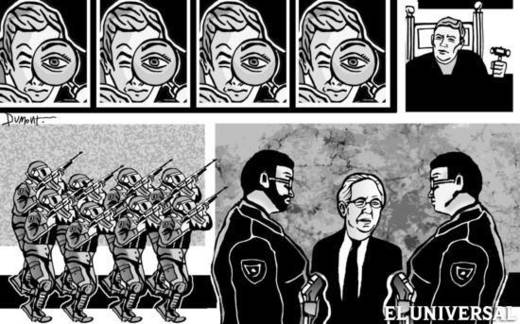 Harsh criticism was, of course, not to be welcome. On December 18, 2014 the European Parliament adopted a resolution “on Persecution of the democratic opposition in Venezuela” containing a long list of rather uncomfortable recitals on the actions of the government since February 2014 street protests have broken out in Venezuela, also mentioning the economic woes, shortages of basic goods, and the record levels of crime and insecurity the nation is confronted with. The Venezuelan Foreign Ministry replied that, by focusing on Venezuela, the European Parliament was attempting to divert attention from the European crisis.

“For the Bolivarian Government, it is worrying that the European Parliament and the High Representative of the European Union (EU) divert the attention from the serious economic crisis that hits the member countries of the European Union as a result of cuts in welfare, and the consequent structural poverty their peoples suffer; instead, they focus their efforts on discrediting the achievements of the Bolivarian Revolution,” the document issued by the Venezuelan Foreign Office highlighted.

The European Parliament noted that: [it] “Is deeply concerned at the worsening situation in Venezuela and condemns the imprisonment of peaceful protesters, students and opposition leaders; urges the immediate release of those arbitrarily detained prisoners, in line with the demands made by several UN bodies and international organizations.” And also that: [it] “Reminds the Government of Venezuela of its responsibility to ensure that all trials conform to international standards; recalls that respect for the principle of separation of powers is fundamental in a democracy and that the justice system cannot be used by the authorities as a means of political persecution and repression of the democratic opposition; calls on the Venezuelan authorities to withdraw the unfounded charges and arrest warrants against opposition politicians and to ensure the security of all citizens in the country, regardless of their political views or affiliations.”

Among the facts stated in the recitals, the cases of political detainees such as Leopoldo López, Daniel Ceballos, Vincenzo Scarano and Salvatore Lucchese are highlighted, as well as those of jailed student leaders such as Sairam Rivas (who was later released on probation, on September 16, 2014).

On February 25, the country became once again a subject of discussion at the European Parliament, this time around triggered by the arrest of the Mayor of Caracas, Antonio Ledezma, and the death of the 14-year-old schoolboy Kluivert Roa. Spanish MEP, Luis de Grandes, supported by the EPP Group, introduced a debate on the latest events in Venezuela on that day s agenda of the plenary session. “The reason for requesting this debate is clear. In December, we approved a resolution with the widest support, asking for respect of human rights and freedom of speech in Venezuela. Not even three months have elapsed and the situation not only has not improved, but it is exceptional. New imprisonments, persecution of the opposition and greater risks of sliding backwards are rife. Our request for a debate is more than justified, especially when a 14-year-old child died yesterday on the streets during a confrontation,” De Grandes said.

As evidenced from the records of that day s debate, the majority of parliamentarians called for the release of Mayor Ledezma and expressed concern at the possibility of new protests leading to more acts of violence, and even fears of a possible suspension of parliamentary elections. European Commissioner for Humanitarian Aid and Crisis Management Christos Stylianides considered unacceptable the arrest and detention of the Caracas Mayor and called on President Maduro to “make every effort to demonstrate that he prioritizes respect for democratic principles.” He called the jailing of opponents and restricting their rights “deplorable.”

Of course, not everyone took the same view. The words by Javier Couso, from Spain s United Left Party, who said that in the case against Ledezma all regulations were complied with, synthesize the other side of the argument: “Despite the fact that the Government of Venezuela has won internationally audited elections, we have witnessed the attempts from the radical right to overthrow by violence the legitimate governments.” The representative of Pablo Iglesias Podemos party abstained from participating in this and the previous debate.

The plenary will meet again in Strasbourg in March and the adoption of a new resolution on Venezuela is on the agenda. This should serve as an indicator of the negative signals that President Maduro s still-infant tenure is sending to the world.

Either far away or near

On Thursday March 5 another voice added to the chorus of warning voices. It is a familiar voice though, because he had earlier expressed his concerns: Zeid Ra’ad Al Hussein, the United Nations High Commissioner for Human Rights, reported before the Human Rights Council the situation of violence and human rights abuses in 38 countries. The UN High Commissioner included Venezuela in the section “Countries of concern in the context of a shrinking democratic space,” along with Saudi Arabia, China, Egypt, Myanmar, Russia, Thailand, and Turkey.

“I remain very concerned at the deteriorating human rights situation in Venezuela, particularly the government s harsh responses to criticism and to peaceful expressions of dissent,” Zeid noted. “I am particularly concerned at the continued detention of opposition leaders and demonstrators, often for prolonged periods,” he added.

The other major international forum, the Organization of American States has also issued opinion through its Secretary General José Miguel Insulza, “A dialogue in Venezuela is necessary, because the economic and social situation is very critical,” he said in an interview with Chile’s El Mercurio newspaper published on February 16. Earlier, concerning the visit to Caracas of former presidents Andrés Pastrana (Colombia), Sebastián Piñera (Chile) and Felipe Calderón (Mexico), Insulza had made some remarks about the treatment received by these visitors: “I say to the former presidents ‘Welcome to the club of the insulted by a President of Venezuela. It seems that anyone who says something that affects Venezuela should be condemned, and that seems idiotic to me.”

However, former Colombian President Pastrana was not to be discouraged. Following his failed attempt at visiting opposition leader Leopoldo López, imprisoned in the Ramo Verde military jail, on March 3 he headed for the headquarters of the Inter-American Commission on Human Rights to request protective measures for imprisoned opposition leaders López, Ledezma and Ceballos, and also for Julio Borges, María Corina Machado and Henrique Capriles, all threatened with imprisonment.

Already the Commission had officially stated its “deep concern” about the situation of the rule of law in Venezuela. After a year without public pronouncements on the matter, it issued a statement calling for a trial while on bail for López, Ledezma and Ceballos, but warned of an “alleged lack of safeguards to ensure due process in investigations and trials.”

It further called on the government to resolve differences with the opposition within the framework of peace and respect for human rights, and demanded: “The Committee urges the State not to criminalize political opposition leaders and ensure the participation of all sectors of the Venezuelan political life, as well as to guarantee the participation and human rights of those who identify with the opposition to the government.”

On February 20 President Maduro warned that an international plot was underway: “The right of Madrid, the far right of Bogota and Miami, have an axis Madrid-Bogota-Miami to conspire against our country.” The argument, of course, works for his allies, especially for members of Unasur.

“We are willing to travel to Venezuela as many times as necessary to collaborate with the revolutionary authorities of the government elected by the Venezuelans and help avoid what seems like a new coup attempt,” said Patiño during a solidarity event held in Quito.

On that event the President of the Ecuadorian National Assembly, Gabriela Rivadeneira, said that mayor Ledezma was arrested for “participating once again in a conspiracy to overthrow the [Venezuelan] government by violent means.”

A group of Peruvian deputies clearly did not see matters in this light. The president of the Foreign Relations Committee of Congress, Lourdes Alcorta and 27 other MPs signed on to a document rejecting the crackdown on opposition protesters in Venezuela and condemning the arrest of Mayor Ledezma. The Foreign Ministry of Peru used a more conciliatory tone, however. On February 25 it issued a statement lamenting the murder of the 14-year-old schoolboy from Táchira state: “It is a very sad fact that should lead us to redouble our collaborative efforts to prevent acts of violence pitting Venezuelans against one another.” It requested a Unasur mission to foster dialogue.
The head of the Peruvian cabinet, Ana Jara, lifted up her voice a bit more loudly: “I sincerely hope that that there is freedom for opponents to Mr. Maduro s regime. It is not a good signal that whoever raises a flag of criticism of his administration should end up behind bars.”

On February 25 a group of Brazilian deputies succeeded in pushing through parliament a motion of condemnation against Venezuela for “breaking the democratic principle and offending individual liberties and due legal process.” And Venezuela s possible exit from Mercosur is being evaluated as a result of the country s breakdown of democratic engagement.

Today, Friday, June 18, vehicles with plates ending 9 & 0 CANNOT circulate The measure is countrywide and applied between 5:00 am and 9:00 pm,...
Guanacaste