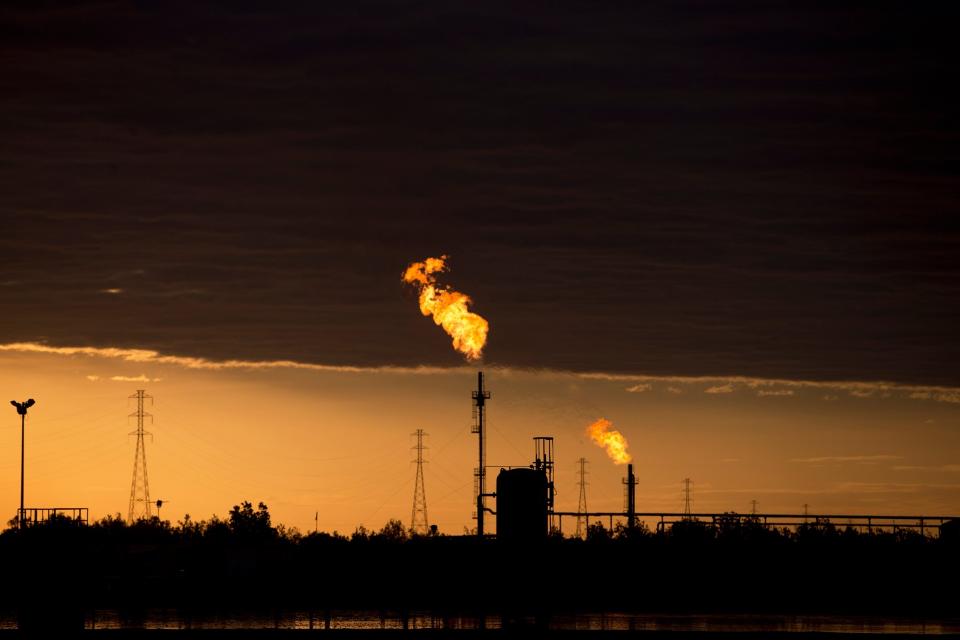 TODAY VENEZUELA (AP) You can’t miss it, rising off the main highway, a mountain of toxic soot towering over the flat, sunbaked scrubland of eastern Venezuela.

The buildup of petroleum byproduct known as coke isn’t just an environmental hazard polluting the air of neighboring communities. It’s a potent symbol of the waste and unfulfilled promise of an oil industry more vital than ever to Venezuela’s economic health.

For years, state-run oil monopoly PDVSA exported coke to great profit. But a 2009 fire knocked out a conveyer belt used to transport it to waiting ships. Exports have all but stalled ever since, and the residue has been piling up, representing millions of dollars a day in lost revenue at a time of a deep economic crisis marked by widespread shortages and galloping 68 percent inflation.

The black dunes sit at the gateway to what was long known as the Orinoco Belt and which last year was renamed the Hugo Chavez Oil Belt, in honor of the late president. The Costa Rica-sized area is home to the world’s largest oil reserves and about half of Venezuela’s current production. Chavez traveled to this region, which was settled by American oil companies in the 1930s, when he decided to end foreign ownership of the country’s oil wealth

“There can be no socialism if our country doesn’t have control of its resources,” Chavez declared on May Day 2007, announcing he would rip up contracts with foreign oil companies worth billions of dollars.

But economic mismanagement, compounded by the recent plunge in prices, has created serious problems for the oil business, analysts say.

Following a 2002-2003 strike, Chavez drove out thousands of workers at PDVSA and bloated its payrolls with government supporters who lacked training and experience. As he drained a windfall from record oil prices to spend on social projects, the company fell behind on its bills and investment slowed. The result, analysts say, has been a steady decline in production from 3.3 million barrels a day in 1998, the year before Chavez took office, to the current estimated 2.4 million barrels.

The industry’s decline is evident throughout the oil belt, from the stalled construction of six upgraders needed to transport the region’s tar-like crude, to the mostly empty lots where Chavez signed deals to drill with anti-American allies such as Belarus, Cuba and Iran.

Workers taking a late-afternoon water break along a dirt road said that six months ago their employer, PDVSA contractor Tucker Energy Services, was asking them to ready as many as six new wells a week. Now it’s down to half that and they fear it could drop even more.

“We’re the checkbook of Venezuela, so if we go under so will the country,” said technician Argenis Santos.

President Nicolas Maduro, whose approval rating has plunged to around 25 percent, has no choice but to lean on PDVSA to help Venezuela back on its feet and has been quietly trying to lure back some of the jilted foreign drillers.

Even in its hobbled state, oil remains the economy’s lifeblood, accounting for 96 percent of exports. And unlike hydraulic fracturing in the U.S. or the development of deep-water oil fields in Brazil, both threatened by an almost 50 percent tumble in oil prices since September, the sheer volume of easily extractable crude in Venezuela should make production profitable at almost any price, albeit less so at current levels.

While output in the belt has expanded gradually, it has declined in older oil fields elsewhere and economists say projects here are moving too slowly to provide relief from the crisis or come close to meeting Chavez’s goal of producing 6 million barrels a day by 2019. Some of the state-owned companies Chavez brought in to replace the private drillers, such as PetroVietnam and Malaysia’s Petronas, have either halted production or pulled out because of economic turbulence in Venezuela and disagreements with Maduro’s cash-strapped government.

Meanwhile, U.S. petroleum exports to Venezuela, much of it fuel additives to dilute the country’s heavy crude, have grown twelvefold in the past decade as domestic refineries go unmaintained.

PDVSA did not make any official available despite repeated requests by The Associated Press for an interview.

Traveling around the long-neglected region it’s easy to see why Chavez’s decision to give Big Oil the boot remains popular.

In the town of San Tome, the tree-lined worker camps built by Andrew Mellon’s Gulf Oil attest to the discriminatory living conditions that prevailed for decades. The Americans enjoyed a country club setting in what’s still known as North Camp; their Venezuelan co-workers lived in the less spacious South Camp across the road.

Francisco Rivas Lara, who started in Venezuela’s oil industry in the 1940s as a teenage office assistant for Texaco, believes nationalization was the correct path after decades of domination by foreign multinationals. But he says corruption and the preference for politics over developing skilled professionals are to blame for the industry’s current malaise.

“Private companies don’t have a country or a heart, and money has no homeland,” said Rivas Lara, who now heads the oil engineering program at Venezuela’s National Experimental University of the Armed Forces. “The problem is people confused socialism with laziness, villainy and theft.”

Amid the mounting economic pressures, Maduro has loosened some of the country’s rigid controls on foreign investment. In exchange for loans, companies get greater control over projects and access to Venezuela’s most favorable exchange rate. So far, Spain’s Repsol and Chevron have taken up the offer.

Investors were also heartened by last year’s replacement of longtime oil czar Rafael Ramirez with the lower-profile Eulogio Del Pino, a Stanford University-educated technocrat who is seen as a less political PDVSA president.

But analysts said most companies are investing the minimum while waiting for the business environment to improve. Meanwhile, the cash crunch has grown so severe that Maduro has floated the idea of selling PDVSA’s American subsidiary, Citgo. He’s also vowed to raise the world’s cheapest gasoline prices that many Venezuelans consider a birthright.

Such steps, if taken, seem unlikely to ease the economic crisis, however.

“It will be a miracle if they maintain production at current levels,” said Richard Obuchi, an economist and energy specialist in Caracas. “The industry needs a major boost of investment but that’s impossible given the economic uncertainty.”