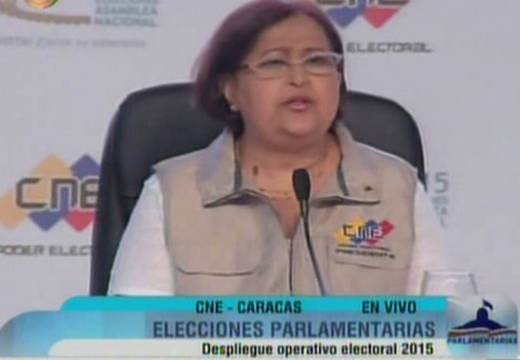 TODAY VENEZUELA- President of the National Electoral Council (CNE) Tibisay Lucena informed on Monday early morning that the parliament vote held on Sunday, December 6, was held in calm and peace.

She praised the behavior of voters, poll workers and the Plan República security operation.

From the CNE press office in Caracas, along with CNE directors Sandra Oblitas, Socorro Hernández, and Luis Emilio Rondón, Lucena informed that the ruling United Socialist Party of Venezuela (PSUV) won 24 nominal deputies elected nominally and 22 deputies chosen by list, for a total of 46 deputies.

For its part, opposition umbrella group Unified Democratic Panel (MUD) got “72 nominal deputies and 27 by list, for a total of 99 deputies,” she noted.