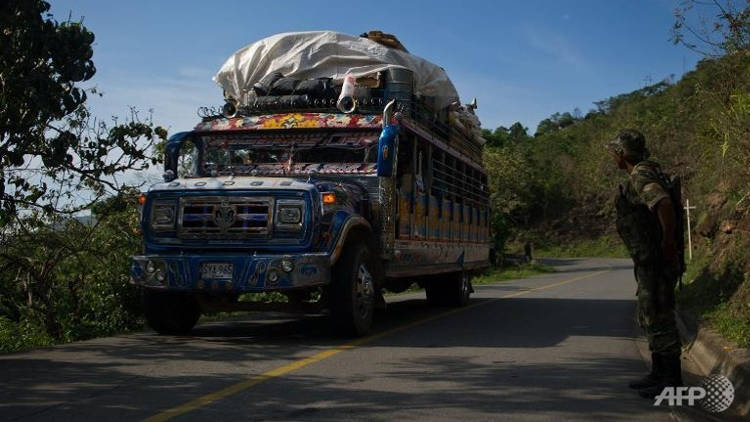 A member of the Revolutionary Armed Forces of Colombia (FARC) guerrillas stops a chiva at a checkpoint on route between Caloto and Toribio, department of Cauca, Colombia. (AFP/File/Luis Robayo)

(TODAY COLOMBIA) – Colombia’s FARC rebels began a 30-day unilateral ceasefire on Sunday but there was no let-up from government operations which left one guerilla dead.

urgency are being held.

President Juan Manuel Santos’ government has rejected the idea of any ceasefire until a peace deal has been signed.

The government on Sunday said security forces had launched an operation in the southwestern province of Cauca, one of the most restive regions in the insurgency.

The government said the offensive killed a FARC fighter believed to be responsible for a bomb attack against a former minister in Bogota last year which claimed the life of his bodyguard and driver.

Police said the FARC guerrilla targeted in Sunday’s operation had been planning further attacks in Cauca and Bogota.

Santos last week said FARC forces would not be shown any respite despite their unilateral ceasefire, saying to do so would give the rebels a strategic advantage.

Colombia has endured five decades of conflict that has left hundreds of thousands dead and displaced more than 4.5 million.

- Advertisement -
Paying the bills
Previous articleChina now has the right to build a Nicaraguan canal to compete with Panama Canal
Next articleVenezuela Gov’t Claims Homicides Down 30%; Really?