QCOSTARICA – It happened on Tuesday, in Panama, while watching an under-23 game between Costa Rica and Panama, when he tried to get onto the field after the final whistle.

Television cameras and cellphone cameras of those nearby caught all the action: pushing and shoving, fists flying and even a flying kick by the security guard, who was able to take down the man bigger than he.

In the end, the temporary violent action by the coast of Costa Rica’s national men’s team cost him his job. 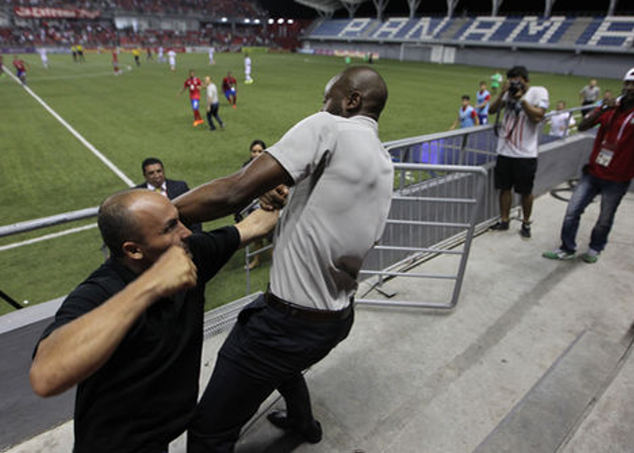 On Wednesday, hours after arriving back in Costa Rica, Wanchope announced his resignation.

On national television and with the president of the Fedefutbol by his side, Wanchope apologized to Costa Rica and Panama fans for his behaviour, saying he lost his head.

“We are human beings and unfortunately I reacted in an unacceptable way for the position I held,” said Wanchope during the news conference.

The now former coach said that since he took on the job as coach the (soccer) situation has been tough, tense, and until yesterday he had managed to handle it. Wanchope explained that he had been able to handle the criticism of reporters and on the social media, but “hard to hold back when someone lays a hand on you.”

Wanchope, previously assistant to Jorge Luis Pinto when Costa Rica reached the quarter-finals at the World Cup 2014 in Brazil, took over Costa Rica’s team last year after a career as one of Central America’s most famous forwards.

What really happened?
Wanchope tried to get onto the field from the stands, pushes a young man standing by the gate, before getting into a scuffle with another man, a stadium private security guard. Police broke up the fight before it got too out of hand, but the damage had been done, it was all on camera.

By accounts from Panama RPC journalist, Alessandra Mezquita, and the video by TV Max de Panamá, Wanchope had been complaining, shouting at the officials, that the game was fixed, trying to get onto the field three or four times, until he finally tried to force his way past the gate, pushes or gets pushed, and the rest is history.

Wanchope would only say publicly that he lost his head.