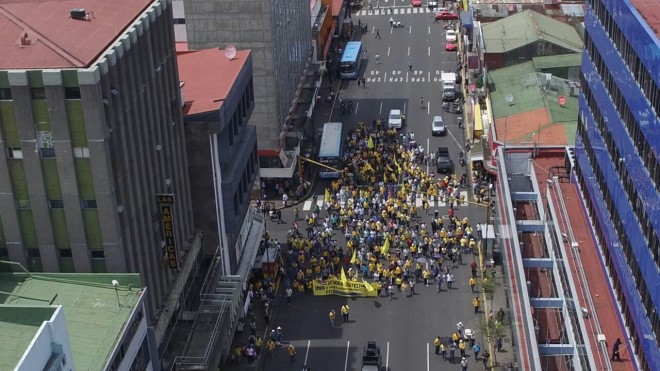 QCOSTARICA – What if you called a strike and nobody showed up? That is what appears to have happened yesterday, almost,  demonstrated by the weak support to the union-driven collective strike action by Patria Justa that was meant to have paralyzed the country, indefinitely.

What did come of the day, however, is a late night agreement, signed minutes after the stroke of midnight Tuesday, after several hours of meeting between government officials and Patria Justa representatives, effectively ending the strike.

On the part of the government, it undertook to convene special legislative sessions for debate of the Ley del Salario Minimo Vital (Minimum Living Wage Law). The government will also promote the opening of dialogue between the CCSS, Patria Justa and other social organizations.

On the part of the union-collective? In a television news interview this morning, the leader of the Patria Justa union-collective, Albino Vargas, said the agreement allowed the government to save face and that Monday’s action was a “strategic” dry-run of protest actions. to come.

Although it was promoted as a “historic strike”,  given that state institutions like RECOPE and ICE, which, with its massive work force usually stands alone in any protest, joined the Patria Justa movement, support for the action was weak, on the streets and in government offices.

At ICE, for example, only 25 of the 140 of its agencies, meaning few ICE workers were on the streets. In real numbers only 1,053 or 7% of its 15,041 employees. In ICE led protests, more than 10,000 ICE employees, in their yellow shirts, have moved through the streets of downtown San Jose. On Monday only a handful of the shirts dotted the streets.

In the Caribbean, the Limon port authority, the Junta de Administración Portuaria y de Desarrollo Económico de la Vertiente Atlántica (Japdeva), reported that the Moin and Limon ports were not affected by the strike. A number of dock workers went on strike before 6:00am Monday, but by 7:00am, a quick and non-violent police aciton retook the ports.

The Caja Costarricense de Seguro Social (CCSS) reported that only 745 employees or 1.3% of its staff was on strike, affecting 86 surgeries to be suspended due to the strike. Caja officials said that no appointments were lost or rescheduled.

The biggest support for the strike was by RECOPE workers, where 85% of the 1,500 employees walked off the job, threatening to starve the country of fuel.. The most affected were the Ochomogo (Cartago) and Limon distribution plants.

Missing on Monday were the porteadores, informal (legal and illegal) taxis,the large groups of teachers, doctors, nurses and many of the other public sector employees expected to have amassed in front of the Ministerio de Hacienda (Ministry of Finance) building in San Jose and other city centres around the country.

Motivating the strike action are the government’s proposal to cut back on perks enjoyed by a number of public sector employees.

The weak support was evident by noon when the television news channels had nothing to report, the online edition of La Nacion had nothing to add, the buzz on Crhoy, the continuous news reports,was not about the strike.