The restrictions from Monday to Sunday from 10 pm and 5 am and two plates daytime weekdays will be maintained; A pilot plan will allow 3,000 fans at National Stadium for major team games

QCOSTARICA – Starting Wednesday, September 1, the daytime weekend vehicular restrictions will be eliminated, that is all vehicles can circulate between 5:00 am and 10:00 pm on Saturdays and Sundays in September.

However, the nighttime – 10:00 pm to 5:00 am –  restrictions for all vehicles (save for the well-known exempted) will continue.

That was the announcement this Friday afternoon by the Minister of Health, Daniel Salas, from Casa Presidencial. 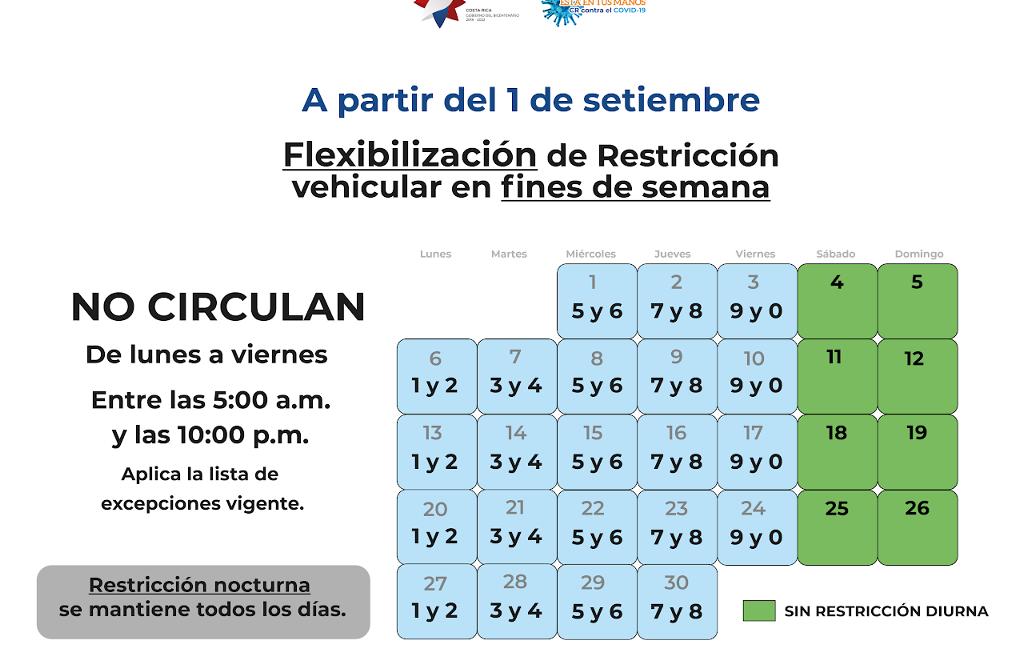 This change in the sanitary vehicle restriction will allow families to plan more extended trips, in response to repeated requests from the service and restaurant sectors.

Meanwhile, between Mondays and Fridays, the daytime from 5:00 am to 10:00 pm prohibition of two plates per day will be maintained.

The advance communication said a government source aims to facilitate sectors such as commerce, tourism, bars, and restaurants to prepare in advance for the new dynamics that will rule in September.

On the other hand, it was confirmed that during the last two weekends of August the diurnal restriction for even and odd plates will be maintained.

Alexánder Solís, president of the National Emergency Commission (CNE), ratified the measures at the noon conference, not without warning that September is a “critical month in projections” on the number of COVID-19 infections.

He recalled, of course, the need to respect protocols, with an emphasis on bubbles. “To reiterate that there are no sports, school or labor bubbles,” he said.

This Friday’s announcement was received with satisfaction by the Costa Rican Union of Chambers and Associations of the Private Business Sector (Uccaep).

“We see positive that the vehicle restriction for weekends has been eliminated and we also see positively that there is no deterioration in the measures that had been taken.

“We hope that there will be a decrease in the issue of infections, that people take care of themselves and respect the protocols,” said Fabio Masís, executive director of the organization, in a statement.

The spokesperson announced that they asked the Executive Power for the vaccination schedule, to have an estimate of when there will be a “generalized immunity” in the country, at which time, according to the businessmen, the elimination of the vehicle restriction should be considered.

In fact, in September a pilot plan will be applied at the National Stadium to allow 3,000 fans to enter two elimination games for the men’s National Team.

The pilot plan contemplates allowing 8.5% of the possible capacity. The Minister of Spors, Karla Aléman left the gates open for all stadium to start allowing fans in October if the pilot plan is a success.

Also, starting in October, bars, and restaurants could increase their capacity to 50%; but the change will depend on the behavior of the pandemic. However, for September, bars will continue at 25% maximum capacity.

All hotels with 100 rooms will continue to only be able to operate at 75% of their capacity; Premises where artistic activities are carried out (cinemas and theaters) with valid sanitary permits will continue with the possibility of receiving up to 500 people, maintaining a distance of 1.8 meters.

According to the latest report from the Universidad Hispanoamerica (UH), the contagion rate of covid-19 in Costa Rica fell in the last seven days, but remains at high levels that imply greater transmission.

[In fact, the country has registered an increase in covid-19 cases in recent weeks, which for specialists is a sign of an imminent new pandemic wave or a continuation of the current prolonged wave.

The Central American Population Center of the University of Costa Rica (CCP-UCR) estimates that the peak could arrive between next week and the end of next month.

This at a time when Costa Rica would be 150 days away from achieving herd immunity, that is when 80% of the 4.5 million targeted population has been inoculated against the SARS-CoV-2 virus.

If the current vaccination rate is maintained, this would occur in mid-January.

A week ago, the country was 129 days away from reaching the goal and two weeks ago, 147 days. Four weeks ago, it was 93 days away, when Costa Rica received a donation of 500,000 doses of the vaccine from the United States.

The country’s pace of mass vaccination depends on the weekly deliveries, which have increased in the past several weeks but still below of the capacity of the Caja Costarricense de Seguro Social (CCSS) to vaccinate.

Last week, the Finnish government made a bold decision....
Trends