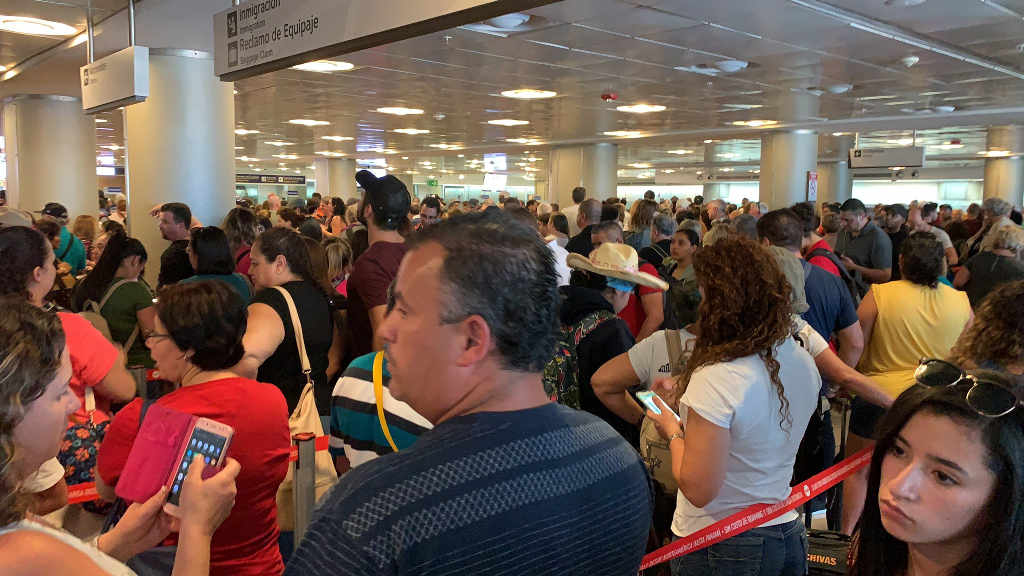 Rico’s TICO BULL – Good morning, what a crazy day in paradise on Saturday. A system failure of the Poder Judicial (Judiciary) that the country’s immigration service connects to had thousands arriving or leaving Costa Rica wait for hours at the San Jose airport.

When I arrived at the airport I had no inkling something was wrong. I had put the heavy traffic leading into the terminal as just a busy day. Rather than entering the parking lot at the arrivals, it was faster through the departures. A good tip to keep note of.

Outside the door C of the departures, there was a long line. At first, I thought, “the whole world is Costa Rica today”. These people were surely waiting for a bus, but then I noticed they had no luggage.

When I arrived at the arrivals level there were lots of people waiting for arrivals. Nothing out of the normal, it was peak time. But, as we all started to notice, only a handful of people were coming instead of the droves of excited tourists, mixed in with the locals coming home and frequent visitors. The look on their faces, their body language is different.

One hour and nothing. Two hours and still a handful of people. Got a message from my passenger, “another hour, be patient. Lots of people”.

It was now almost 2:30 and the word had started to spread, there was a system failure. Ok, no big deal, been through this before. Yet, as I look at the bridge on the upper level, the line of people was still thick. Something is not right.

Wait…wait…wait…wait. What else was there to do? We on the outside had no idea what was going on inside. As typical, airport officials do not comment, we can only rely on the word of someone you know on the inside to get an idea of what may be going on. And even then not really much, those on the inside only know to wait, those of us on the outside, even less.

It wasn’t until 5:20 when my passenger finally came out and we could be on our way. Welcome to Costa Rica.

The story I got, first hand, was of the horror of waiting with no access to water or food. The couple of bathrooms were no match for the great number of people desperate, rude, almost to the point of violence.

Then there was the complete and utter disaster with the bags.

At this time of day, more than a dozen flights converge on Costa Rica’s San Jose international airport. If we average out 100 passengers per flight, plus the over 300 passengers on the British Airways and Iberia flights of the afternoon, you have almost 2,000 people waiting, waiting and even more waiting, in desperation, with no water and no food and few toilets.

Not a pleasant arrival in paradise. This is when “pura vida, mae” and ‘”diay” explain it all.

I was never able to learn exactly what happened. But what I am to understand from a couple of sources is that the Poder Judicial was that something went wrong during a maintenance routine of their information system.

The immigration service links to the Judiciary to connect to Interpol to check on international warrants and lost or stolen passports.

This is the only connection. There is no backup system.

Who pays for this gross incompetence? As my friend driver, a Tico mae, put it, “we all lose today”.

QCOSTARICA - The press must have access to public...
Political Economy